[ The Korea Herald – Send E-mail ]
[Eye Interview] Education reformer aims to tackle elitism in schools
Superintendent Cho Hee-yeon says South Korea needs visionary, revolutionary educators to nurture future talent
By Bak Se-hwan
Published : Aug 4, 2017 - 15:07
Updated : Aug 4, 2017 - 15:07
Education in South Korea has no shortage of problems: an emphasis on tests that drives teenagers -- even pre-teens -- to engage in yearslong competition for top universities, a massive and growing private academy market that dwarfs public schools, and despite all this, a growing mismatch between education and job skills.

But Superintendent Cho Hee-yeon, head of the Seoul Metropolitan Office of Education, believes it is his duty to reform the country’s education system -- which has long relied on rote memorization at the expense of creativity and initiative -- and tackle deep-rooted elitism. 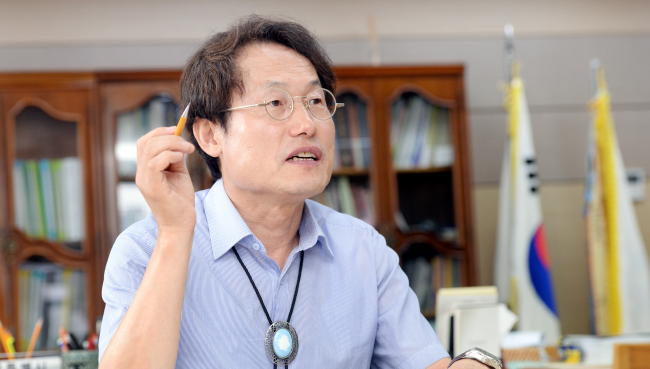 Superintendent Cho Hee-yeon of the Seoul Metropolitan Office of Education (Photographed by Park Hyun -koo/The Korea Herald)
“We need a paradigm shift -- one that is not based on competition, but one that recognizes students’ hidden true capacities,” he says. “We need ‘education revolutionaries.’”

As Seoul’s education chief, Cho, 61, is a divisive figure. His decisions, liberal policies and ideas often invite harsh criticism from conservative educators and parents. Some have taken legal actions to stop him, although all have failed so far.

In person, he is a cordial man, with a calm smile and observant, bespectacled eyes.

When he spoke of reform in an interview with The Korea Herald, his intensity and focus was a reminder of the challenges that any effort to change the status quo in schools would face in South Korea’s education-obsessed society. 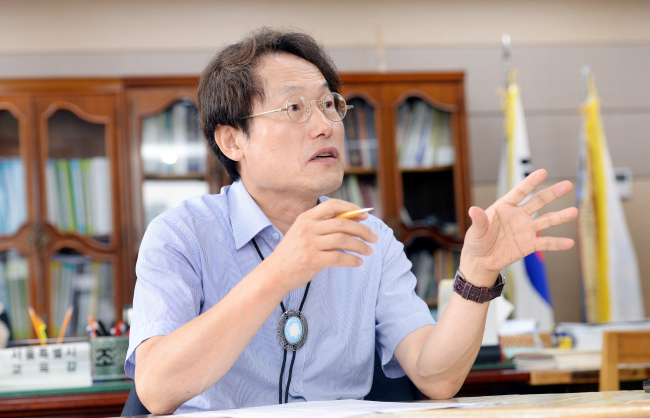 (Photographed by Park Hyun -koo/The Korea Herald)
A former liberal sociology professor at Seoul’s SungKongHoe University, Cho is determined to go his own way about it. Neoliberalism prioritizes competition and inequality over social capital, and that favors elitism in every sector, especially education, he said. The survival-of-the-fittest model will help no one in the age of artificial intelligence, he added.

“Rich families have more resources for their kids to win the race, while others keep pushing their own kids into the hierarchical education environment to get into top-tier universities and climb up the ladder,” Cho said.

“We need systemic answers as we have systemic challenges. We should start thinking systemically and move away from the current system where students are caught up in a competition for admissions to elite private high schools in order to later enter top universities.”

Origins of the problems

The root of the problems was not that education policymakers preceding him did not know where the problems were. It was rather because the origins of those problems were largely outside the reach of schools, deeply entrenched in the traditions of a Confucian society that values education the most, says Cho. More recently, there has also been an emphasis on education as a means of social mobility.

Furthermore, the political response to curb excessive competition has largely been short-sighted, such as regulating the operation hours of cram schools.

But real reform should aim to tackle elitism itself -- our deepest and most stubborn educational challenge, Cho stressed.

Last month, Cho criticized the nation’s most coveted elite private high schools during a press conference to mark the third anniversary of his inauguration, saying that the schools have become “an alternate route to top universities.”

With tuition fees amounting to up to over 20 million won ($17,400) a year, these schools have become the favored choice for parents who want better education for their children. Competition to get into these schools is so extreme that it now starts in primary schools.

Behind the education craze lies the belief that good universities will lead to good jobs, which then leads to good marriages and good lives.

However the liberal educator’s campaign for equality in education, more precisely the removal of the elite schools, is stoking concerns and fears.

Every day, opponents -- many of them parents from the wealthy district of Gangnam, a mecca for the most expensive and top class hagwon, or private academies -- protest the move to abolish elite schools in front of Seoul Metropolitan Office of Education.

On concerns that a shift toward equality would strip education of depth and complexity in order to simplify it for the masses, Cho said he aims to achieve “horizontal diversity” among schools.

“A new public school system, coupled with innovative education curriculums, assessment and college admissions, can increase the quality of all,” Cho said.

The most ambitious of his education-reform efforts is the introduction in 2015 of an “Odyssey School” that runs free-learning semesters under Cho’s signature pilot project for high school freshmen.

Expansion of the free-learning semester will “help set a new paradigm for our education system,” shifting away from memorization and cramming that leads to students doing little else but prepare for standardized assessments, Cho explained.

“Today, our education should aim to attract, retain, and recognize diverse talent in all students, regardless of their family background or test scores,” Cho said.

Seoul’s education office recently announced that it is working to formally designate the Odyssey School, after the two-year pilot program ends. 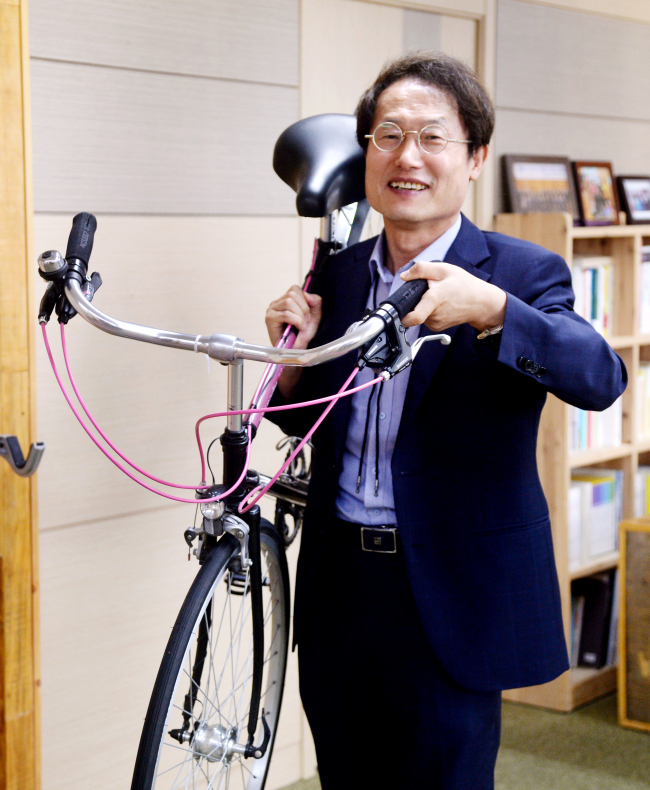 (Photographed by Park Hyun -koo/The Korea Herald)
Cho also said he had set up a task force to implement open-book exams in all elementary, middle and high schools in Seoul, which he believes would “improve thinking and application skills” rather than memorizing textbooks.

In the era of the “fourth industrial revolution,” artificial intelligence, cloud computing and predictive analytics, schools must change to teach skills that will matter in the future, he stressed.

“The rote-learning system and excessive competition are not the answers. Vertical diversity among students through state-of-the-art new schools is all part of my plan,” Cho said.

Critics say the elitist system, though problematic, has attributed to bringing up the performances of South Korean students. South Korea ranks among the top group of high performers in the Program for International Student Assessment.

To Cho, good PISA scores are not something that South Korea should feel proud of, when they come largely by forcing children against their will into never-ending competition.

“That’s an old legacy from the industrialization era where efficiency was the single most important value and the winner took all. We need to move forward,” he said.