[ The Korea Herald – Send E-mail ]
Enacted US law targets North Korea oil, labor trade
By Shin Hyon-hee
Published : Aug 3, 2017 - 17:43
Updated : Aug 3, 2017 - 17:58
The newly enacted US legislation is designed to further squeeze North Korea’s trade of oil, labor and other products and services in order to impede activities that may contribute to its nuclear and missile program.

President Donald Trump on Wednesday signed the package bill into law, which also included sanctions against Russia and Iran. The act passed the House on July 25 and the Senate two days later in a near unanimous vote amid growing bipartisan support for tougher punishment in the aftermath of Pyongyang’s two rounds of tests of intercontinental ballistic missiles last month. 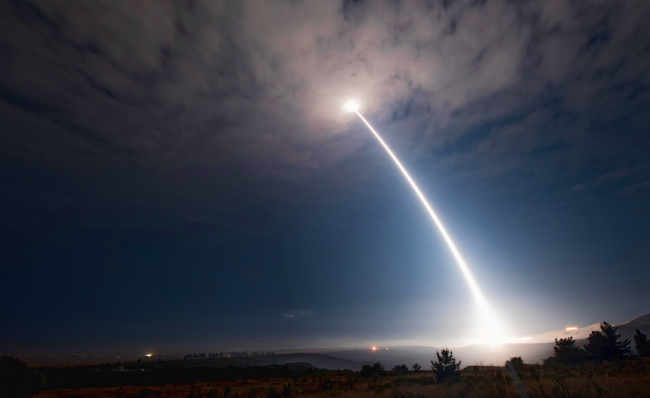 In this image taken with a slow shutter speed and provided by Vandenberg Air Force Base, an unarmed Minuteman 3 missile launches from the base in California on Wednesday. (AP-Yonhap)
The North Korea sanctions in H.R. 3364, which incorporated H.R. 1644 introduced in May, target areas ranging from oil imports and financial activities to labor trade and ship insurance.

It calls for blacklisting individuals and entities engaged in the transactions of significant amounts of crude oil, condensates and other petroleum and natural gas products, except for heavy fuel oil, gasoline or diesel fuel for humanitarian use. There is also a ban on the trade of such minerals as coal, iron or iron ore for which the UN Security Council has imposed a ceiling, as well as the transfer of bulk cash, precious metals and gemstones.

Relatively less addressed items have made it on the list, including labor, textiles, online gambling, online commercial activities and food and agricultural products.

“Any significant goods, wares, articles and merchandise mined, produced, or manufactured wholly or in part by the labor of North Korean nationals or citizens shall be deemed to be prohibited ... and shall not be entitled to entry at any of the ports of the US,” the text reads.

It mandated Secretary of State Rex Tillerson submit a report on whether Pyongyang meets the criteria to be designated as a state sponsor of terrorism within 90 days of the act’s ratification.

On Russia, the legislation is chiefly designed to penalizing Moscow for its interference in last year’s US presidential election and block Trump from unilaterally lifting penalties slapped by his predecessor Barack Obama’s administration for the Ukraine crisis.

The sanctions against Iran were aimed at blacklisting additional entities for their suspected support of terror, weapons trade and the country’s missile program. 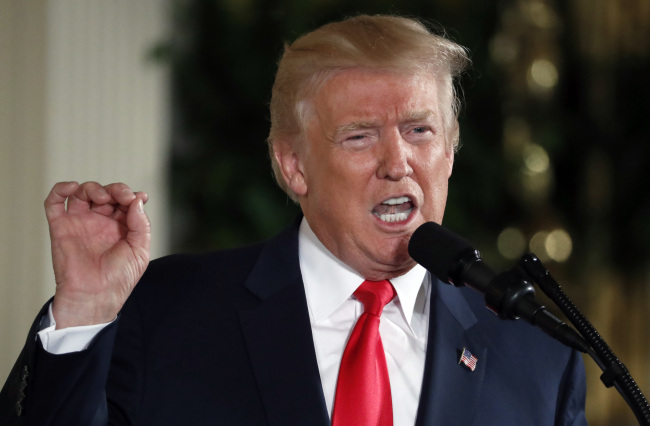 US President Donald Trump (AP-Yonhap)
While calling the package “seriously flawed” because it “encroaches on” his negotiating power, Trump said he did not veto it “for the sake of national unity.” He faces mounting pressure over suspicions of collusion with Moscow during his election campaign.

But the law will give a signal to Pyongyang and Tehran that the US “will not tolerate their dangerous and destabilizing behavior,” Trump said.

House Speaker Paul Ryan said the bill sends a “powerful message to our adversaries that they will be held accountable for their actions.”

Republican Sen. Cory Gardner, chairman of the Senate Foreign Relations Subcommittee on Asian and Pacific Affairs, stressed the need for China to use its leverage -- as the North’s top trade partner, making up some 90 percent of its trade -- to stop the North’s weapons program.

“Every nation of conscience should cut off all finance and trade with North Korea, with a few limited humanitarian exceptions, until such time that Pyongyang is willing to meet its international commitments to peacefully denuclearize,” he said in an op-ed to CNN.

For the Moon Jae-in administration, the legislation may spell trouble when it moves to restart the Kaesong industrial complex in the future, adding to the UN Security Council’s existing constraints.

The president has pledged to seek the factory park’s reopening as a corresponding step to the North’s denuclearization efforts. This is part of his vision to build an inter-Korean economic community -- dubbed the “New Korean Peninsula Economic Map” -- by incorporating Kaesong and Mount Kumkang, and formulating joint industrial zones and traffic networks along the eastern and western coastal areas. But critics at home and around Washington oppose the idea, saying it would only help fatten the coffers of North Korean leader Kim Jong-un in breach of international sanctions.

“The complex’s closure resulted from the North’s fourth nuclear test and for us to reopen it, certain conditions should be formed first, with regard to public consensus and international sanctions. We will make a decision when the time comes,” a Unification Ministry official here told reporters on the customary condition of anonymity.

“The bill adopts an extensive range of new elements of sanctions and has sharply strengthened the existing sanctions enforcement mechanism, reflecting the US’ strong resolve for North Korea’s denuclearization,” ministry spokesperson Cho June-hyuck said at a news briefing Thursday.

“We hope such efforts will help prevent North Korea from stepping up its nuclear and missile capability and lead to its genuine change in attitude.”