US President Donald Trump has raised the possibility of war with North Korea during a conversation with Sen. Lindsey Graham, the politician said Tuesday, floating the idea of a military strike on the communist country as a policy option.

“If there’s going to be a war to stop (Kim Jong-un), it will be over there. If thousands die, they’re going to die over there. They’re not going to die here. And he has told me that to my face,” the Republican lawmaker said in an interview with NBC’s “Today.” “And that may be provocative, but not really.”

Graham said Trump would not let the Kim regime master the technology for a nuclear-tipped intercontinental ballistic missile capable of striking the US, urging China to step up in its role in reining in its recalcitrant ally’s unbridled military testing.

“There is a military option to destroy North Korea’s program and North Korea itself. I prefer the diplomatic approach, but they will not be allowed to have a missile able to hit America with a nuclear weapon on top,” he said. 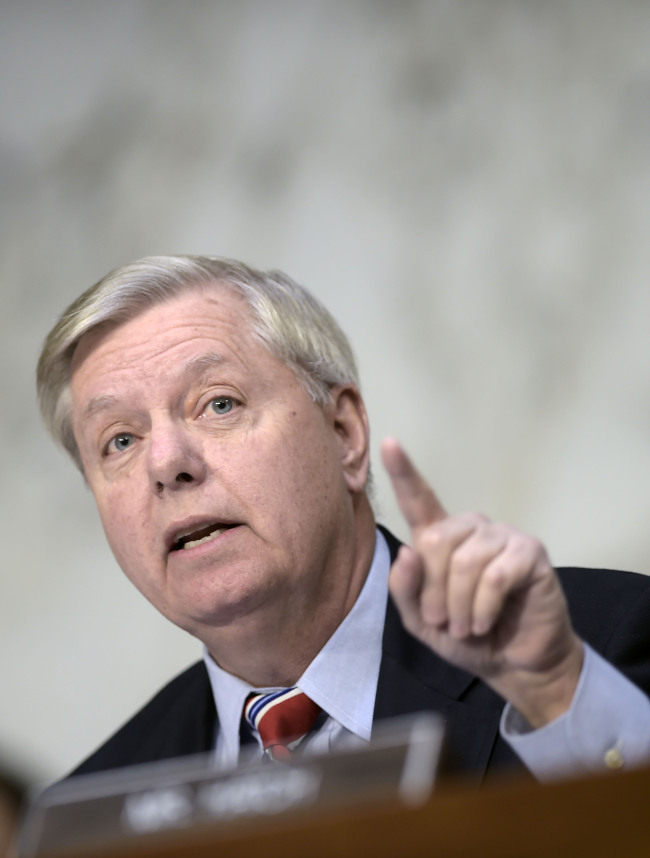 US Republican Sen. Lindsey Graham speaks at a Senate Judiciary Committee session on March 20. (AFP-Yonhap)
Trump has been sharpening his criticism of Pyongyang and Beijing since Friday’s launch, threatening even stronger trade and economic sanctions. The missile is believed to be more advanced than the one tested on July 4 and possibly able to reach not only Alaska but the contiguous US as well.

In reference to the senator’s remarks, the White House reiterated that it was weighing all options to “stop” the North.

“We’ve been very focused on stopping the nuclear program, stopping the missiles, stopping the aggression. That still continues to be the focus, and we’re keeping those -- all options on the table in order to do that,” press secretary Sarah Sanders said at a news briefing.

A few hours later, however, US Secretary of State Rex Tillerson offered conflicting signals toward Pyongyang, saying Washington does not pursue a regime change and wants to have talks someday.

He indicated the administration has few solutions other than to continuously put “ever-greater pressure” on the regime because other options, including a military attack, are “not particularly attractive.”

“And we hope that at some point, they will begin to understand that and that we would like to sit and have a dialogue with them about the future that will give them the security they seek and the future economic prosperity for North Korea.” 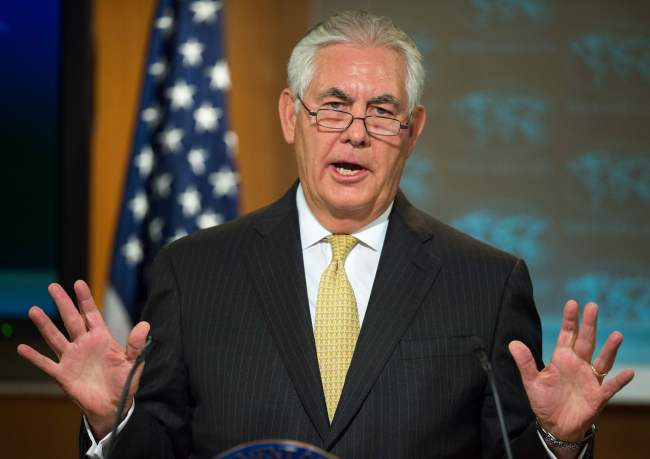 US Secretary of State Rex Tillerson speaks at a news conference on Tuesday in Washington. (AFP-Yonhap)
Despite Trump’s open criticism, the secretary also stressed that the administration is not seeking to “blame” Beijing for the situation in North Korea, though it has a “special unique relationship” and “significant economic activity to influence the North Korean regime in ways that no one else can.”

“That’s why we continue to call upon them to use that influence with North Korea to create the conditions where we can have a productive dialogue,” Tillerson said.

“We don’t think having a dialogue where the North Koreans come to the table assuming they’re going to maintain their nuclear weapons is productive. So that’s really what the objective that we are about is.”

Tillerson’s comments appeared to be intended to manage the spiraling tension amid rising calls among some scholars in Washington for a regime change and a military operation, among others.

Shortly after the ICBM liftoff, the Joint Chiefs of Staff chairmen of South Korea and the US had a phone call and discussed “military response options,” the militaries said.

The situation could further escalate as the allies are expected to kick off their annual Ulchi Freedom Guardian exercises later this month, while speculation persists that Pyongyang may detonate another nuclear device.

So the secretary’s remarks came as something of a relief to many Seoul officials. A Foreign Ministry official here said Tillerson was seemingly seeking to reaffirm Washington’s policy to maximize pressure while keeping the door open for engagement, much in line with the Moon Jae-in administration’s approach.

A senior Cheong Wa Dae official emphasized on Tillerson’s mentioning of dialogue, saying during a meeting with reporters that the two leaders would consult more on the issue when they have a phone call early next week.

Ministry of Unification spokesperson Baik Tae-hyun also said, “Our position remains unchanged that we will sternly respond to provocations, as does the US’ maximum pressure and engagement policy.”

“As our president said in his speech in Berlin, we do not want North Korea’s collapse nor an artificial unification by absorption, I think the US’ stance does not differ significantly from this,” he said at a news briefing Wednesday.