[ The Korea Herald – Send E-mail ]
US, China in heated tug of war over North Korea
By Shin Hyon-hee
Published : Aug 1, 2017 - 18:11
Updated : Aug 1, 2017 - 18:16
The US and China are engaging in an escalating tug of war in the wake of North Korea’s recent intercontinental ballistic missile test, shifting the blame for a flare-up of tensions and threatening to derail efforts to craft a fresh set of international sanctions.

US President Donald Trump on Monday hinted at taking more crippling punitive steps against Pyongyang, saying at a cabinet meeting that the situation “will be handled.” He did not elaborate, but has been toughening his line against North Korea and China after Friday’s ICBM launch, displaying open frustration and criticism over what he saw as Beijing’s failure to contain its wayward ally. 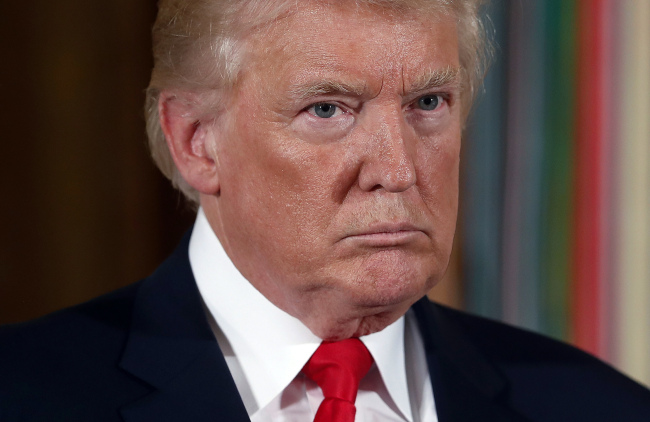 US President Donald Trump (Yonhap)
The Trump administration is seeking to slap trade and economic sanctions on China as early as this week, Politico reported Monday. The Hill also said the measures would include secondary sanctions against Chinese institutions and individuals.

On Saturday, the president wrote on Twitter that he is “very disappointed” with China and “our foolish past leaders have allowed them to make hundreds of billions of dollars a year in trade, yet they do NOTHING for us with North Korea, just talk. We will no longer allow this to continue.”

In New York, the US has even boycotted a widely forecast UN Security Council emergency meeting on the ICBM test, taking issue with China’s lackluster participation in devising stronger sanctions. The time for talks is “over” and any UNSC resolution is “worse than nothing” unless it significantly increases pressure on the North, US Ambassador to the UN Nikki Haley said in a statement Sunday, urging China to decide “whether it is finally willing to take this vital step.”

“No matter how capable China is, China’s efforts will not yield practical results because it depends on the two principal parties,” Liu told reporters at the UN. “They hold the primary responsibility to keep things moving, to start moving in the right direction, not China.”

He accused the US of heightening tension by issuing statements that “all options are on the table” and deploying the Terminal High Altitude Area Defense missile shield in South Korea. 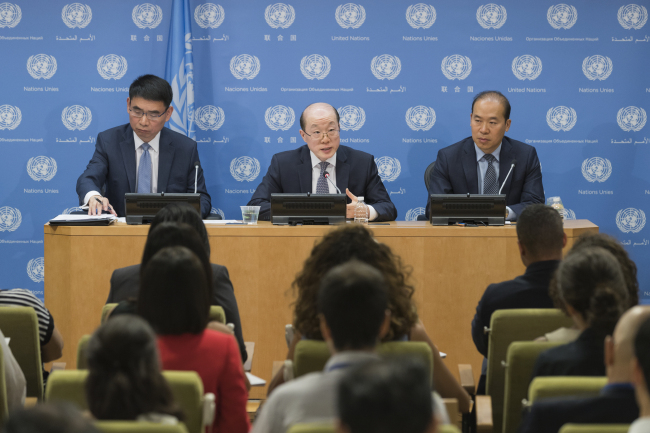 Despite unabated controversy over THAAD’s efficacy here, Cheong Wa Dae countered that the decision had been made by the US and Korea after “much deliberation.” The Pentagon also stressed the system’s defensive nature, saying it is “ready to bring additional pieces in as quickly as we can.”

“A lot of people question the need for THAAD; they question the requirement for us,” Pentagon spokesperson Navy Capt. Jeff Davis told reporters Monday. “But the North Koreans are being far better spokespeople on that than we’re capable of. They’re making the case for us rather effectively.”

The US is also staging a series of shows of force. On Sunday, it flew two B1-B supersonic bombers over the peninsula, and plans to test-fire its own intercontinental ballistic missile Minuteman III on Wednesday, the LA Times reported Monday, citing an Air Force team.

The war of nerves is poised to further intensify as Washington imposes sanctions against Chinese entities, which will likely prompt Beijing to respond angrily and hamper the ongoing UNSC discussions.

The ASEAN Regional Forum, slated for Aug. 7 in Manila, will set the stage for intense debate over North Korea. The regional security conference brings together top diplomats from all six member countries of the stalled six-party denuclearization talks -- the US, China, Japan, Russia and the two Koreas.

“There’s a possibility that spats similar to what’s happening at the UN may occur at the ARF within the South Korea-US-Japan vs. North Korea-China-Russia frame, such as over whether to identify the missile as an ICBM and the level of criticism in a chairman’s statement,” a Seoul diplomat said on condition of anonymity due to the sensitivity of the matter.