"There is a possibility that North Korea is likely to test its nuclear warhead and missile capabilities through a nuclear test with more explosive power," the Ministry of National Defense said in a report to the National Assembly.

The ministry added that the North is ready to carry out another nuclear test at any time at its nuclear explosion site in the northeastern province. 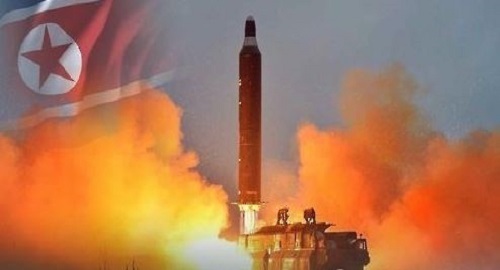 (Yonhap)
The assessment came as the North claimed the successful launch of another ICBM late Friday following its similar test in early July. Pyongyang insisted that the whole US mainland is within its striking range.

Defense Minister Song Young-moo told lawmakers that it is hard to judge that the North has completed technology to make a nuclear warhead small enough to be mounted on a ballistic missile even if it was a missile with intercontinental range.

"It is too early to say that the latest test was to assess its atmospheric re-entry capability," he said.

The North claimed that Friday's test confirmed that the missile has the capacity to guide a warhead into accurately hitting a target with mastered re-entry technology.

Technology for "atmospheric re-entry" is a key element in developing an ICBM as the missile needs to withstand heat and pressure when it re-enters the atmosphere from space.

"As there is a need to talk with an enemy during war, (the government) will continue to call for dialogue," Song said.

The South previously suspended the deployment until an environmental assessment of the battery is finished.

Song said that the deployment will be subject to a review, calling the installment "temporary."

Asked about the need to build nuclear-powered submarines in the face of the growing military threat from the North, Song said that the ministry is "ready to review" it.

It seems to be a change from last year when the defense ministry said that it had no such plan.

"To catch an enemy submarine, we should also have one," Song said in response to a question on what countermeasure the ministry has against the North's submarine-launched ballistic missile threat. "We are considering an atomic power (nuclear-powered) submarine."

Touching on a revision on a missile guideline, the ministry said that it will accelerate its consultation with the US by forming a working-level bilateral committee.

South Korea said Saturday that it and the United States have agreed to open negotiations to revise a bilateral ballistic missile guideline, a move to allow Seoul to develop a more powerful missile to counter the North's provocations.

Seoul will be able to develop a missile with a range of over 800 kilometers and a payload exceeding 500 kilograms if the guideline is revised.

"Later, the two sides will continue consultations after expanding them to the state level," the ministry said. (Yonhap)