[ The Korea Herald – Send E-mail ]
US Senate passes sanctions over North Korea's nukes
By Shin Hyon-hee
Published : Jul 28, 2017 - 17:56
Updated : Jul 28, 2017 - 17:57
The US Senate on Thursday passed a fresh batch of crippling sanctions over North Korea’s nuclear and missile programs, amid rising bipartisan support for further economic squeeze of Pyongyang in the wake of its recent test of an intercontinental ballistic missile.

The bill was passed in a 98-2 vote, as part of a sweeping package that also includes sanctions against Russia and Iran, two days after the House approved it 419-3. The White House has given mixed signals over whether President Donald Trump will sign or veto the legislation, as he falls under mounting pressure over allegations of collusion with Moscow during his election campaign.

The North Korea sanctions in H.R. 3364, which incorporated H.R. 1644 introduced in May, target areas ranging from oil imports and financial activities to labor trade and ship insurance. 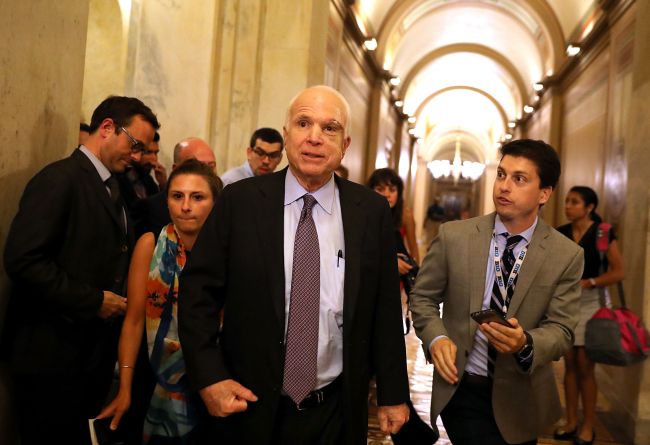 Sen. John McCain (center) leaves the the Senate chamber at the US Capitol in Washington after voting on a health care bill on Friday. (AFP-Yonhap)
It calls for blacklisting individuals and entities engaged in the transactions of significant amounts of not only such minerals as coal, iron or iron ore for which the UN Security Council has imposed a ceiling, but also relatively less addressed items like textiles, online gambling and food and agricultural products.

“Any significant goods, wares, articles, and merchandise mined, produced, or manufactured wholly or in part by the labor of North Korean nationals or citizens shall be deemed to be prohibited ... and shall not be entitled to entry at any of the ports of the US,” the bill reads.

The text bans any sale of crude oil, condensates, refined petroleum, liquefied natural gas and other natural gas resources, with an exception being heavy fuel oil, gasoline or diesel fuel for humanitarian use, as well as the transfer of bulk cash, precious metals and gemstones.

It also mandated the secretary of state submit a report on whether Pyongyang meets the criteria to be designated as a state sponsor of terrorism within 90 days of the act taking effect.

On Russia, the legislation is designed to block Trump from unilaterally lifting penalties slapped by his predecessor Barack Obama’s administration for the Ukraine crisis.

The sanctions against Iran were aimed at blacklisting additional entities for their suspected support of terror, weapons trade and the country’s missile program.

Republican Bob Corker, chairman of the Senate Foreign Relations Committee, lauded the passage of the bill, saying it sends a “strong signal” to the three countries that “our country will stand firm and united in the face of their destabilizing behavior.”

“This bill ensures Congress will continue to play a leading role in defending the American people and our allies from these serious threats while providing the Trump administration appropriate national security flexibility,” he said in a statement.

White House Communications Director Anthony Scaramucci told CNN on Thursday that Trump may “sign the sanctions exactly the way they are or he may veto the sanctions and negotiate an even tougher deal against the Russians.” 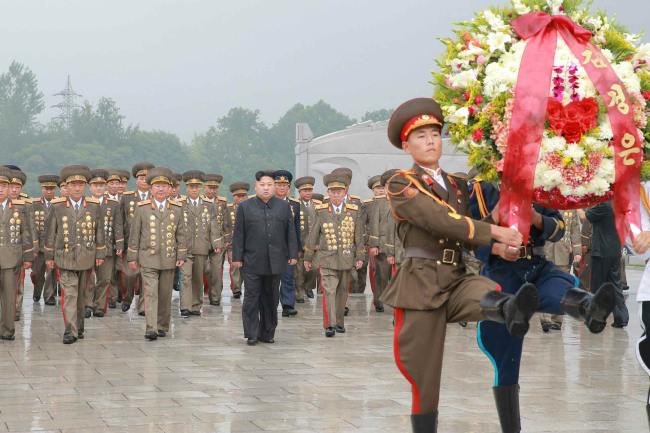 This image released Friday by state media shows North Korean leader Kim Jong-un visiting a cemetery to commemorate fallen veterans during the 1950-53 Korean War, marking the armistice anniversary on Thursday. It was his first public appearances in 15 days. (Yonhap)
The Senate action coincided with a phone call between Seoul’s Foreign Minister Kang Kyung-wha and US Secretary of State Rex Tillerson. They swapped views on follow-up measures to the two countries’ summit last month and the situation on the peninsula since the North’s July 4 ICBM test, the ministry here said.

“The sides discussed ways to deter North Korea’s provocations and drive its denuclearization including a new UNSC resolution in the making now, and agreed to continue policy coordination and cooperation,” the ministry said in a statement.

Japan, for its part, unveiled Friday five organizations, including two from China, and nine individuals to be added to its own blacklist in connection with ties to the communist state. They will be subject to the freezing of assets and other punishment, Foreign Minister Fumio Kishida told reporters in Tokyo, stressing the need for further pressure.

Among the entities are the Bank of Dandong, which the US Treasury last month accused of laundering money for the Kim Jong-un regime, and Dalian Global Unity Shipping, also sanctioned by Washington.