During the presidential election, issues regarding sexual minorities drew attention, and the topic remains a thorny issue that riles up anti-gay sentiment.

On Thursday, 300 organizations formed a coalition, announcing their opposition to providing equal rights regardless of sexual orientation.

Made up of some 250 members, the group, whose name translates to people’s coalition against homosexuality and same-sex marriage, said that revising gender-related clauses of the Constitution would being “confusion” to Korean society. 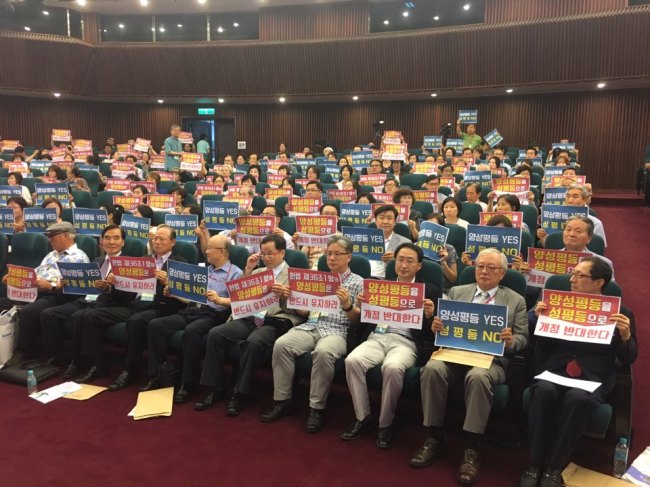 Members of a coalition protesting proposed changes to the Constitution pose at the National Assembly on Thursday. (Jo He-rim/The Korea Herald)
“We have united here today to stop the parliamentary committee on constitutional reform from changing the law to promote gender equality and different sexual orientations,” said Gil Won-pyeong, a physics professor at Pusan National University and the chief of the group’s establishment committee.

The group takes issue with the special committee on constitutional reform’s plan to revise the Constitution to state that the government has the duty to ensure the equal treatment of everyone regardless of sexual orientation.

The committee’s plans are in line with the National Human Rights Commission’s recommendations made in July.

“No one should experience discrimination in any areas, including gender, religion, race, and sexual orientation for any reason,” said the commission’s recommendation.

“Protecting equal rights for the two sexes and to all genders is entirely different. By gender, it can mean over 50 to 70 different kinds (of sexual orientation), such as asexuality. It will trigger so much confusion in society, and in the end, all gender roles will disappear,” said Jei Yang-gyu, a professor from Handong University.

The coalition also calls for the legal definition of marriage to remain as it is, an institution between a man and a woman. The revision committee plans to alter the wording of related clauses.

The group was also joined by Rep. Jun Hee-kyung, a proportional representative from the main opposition Liberty Korea Party, who said that allowing same-sex marriage would create legal issues.

“Legalizing homosexuality and marriage between same sexes would create further problems, such as how to deal with adoptions by homosexual couples. I will work hard to make sure that your worries are heard at the National Assembly,” she said. The first-term lawmaker later explained that she came to the meeting as an individual and as a lawmaker, and the act was not related to her conservative party.

Meanwhile, the revision committee says that homosexuality is not on its agenda.

“While opinions are greatly divided over the issue, the committee has not discussed directly the matter of homosexuality,” Rep. Lee Ju-young of the conservative Liberty Korea Party told The Korea Herald.

Others in the committee highlighted that the focus should be on eliminating the potential for discrimination.

“It is a principle that any kind of discrimination should be eliminated. It is, however, not right to stretch the discussion and interpret it as approving or disapproving of homosexuality in society,” Rep. Kim Kwan-young of the People’s Party, who heads a subcommittee of the parliamentary reform body, told The Korea Herald.

Academics, however, say that the Constitution is fundamentally different from other laws.

“The Constitution is different. It is about setting the values and the rights of the people of this society,” professor Kim Hyung-joon of Myungji University said, added that while marriage can be defined by law, homosexuality is not a matter for “legalization.” Kim added that it would be difficult for same-sex marriages to be legalized in the near future in Korea.

“Nothing has been decided yet, but it is crucial that the fundamental law is able to get rid of any kind of discrimination against anyone in this country.”