Known as the Captur in Europe, the crossover utility vehicle was No. 1 in the segment in the market there three years in a row. But to make it appealing in Korea, where masculine German designs are favored, Renault Samsung added “charismatic features” to the existing design.

“The new QM3 has returned with a more passionate and sophisticated design and the latest specifications, and its perfect design appeals with something different from others,” said Park Dong-hoon, president of Renault Samsung, at an unveiling event. 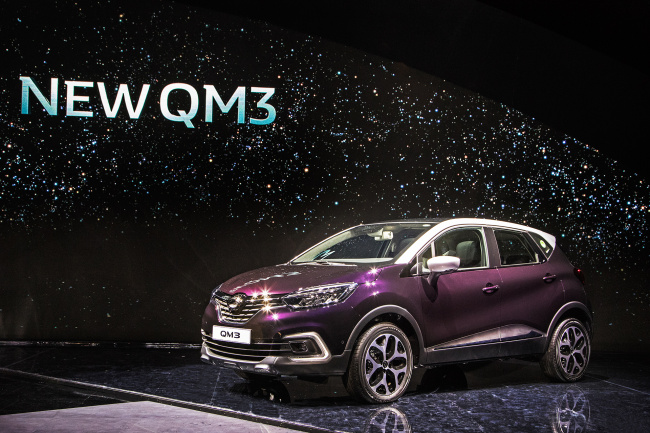 Its headlights are now fully light-emitting diodes, and its daytime running lights come in Renault’s signature C-shaped design. Its chrome radiator grille creates a sharp and elegant look, the company said, comparing it with the CUV’s previous model that had a more family-friendly look. Orange and amethyst black are newly added colors.

A dual-clutch automatic 1.5 diesel engine sourced from transmission specialist Getrag offers mileage of 17.3 kilometers per liter, better than any others in the segment, the company said. The vehicle can even consume less if driving on eco-mode, which is designed to save up to 10 percent of fuel.

The tiny crossover SUV now has a blind sport warning system and driver assistance system, sending warning signs if the car’s sensors detect movements of vehicles in its blind spots.

Inside its cabin, there is a 7-inch touch display that interacts with Android apps from mobile devices. Drivers will have access to free T Map service, a navigation program developed by SK Telecom for five years.

A fixed panoramic glass roof as well as seats and a steering wheel covered with premium Nappa leather are offered for the QM3’s upper trim -- the RE signature.

The company plans to release the price range of the new model and start official sales Tuesday.