Top diplomats from around the Asia Pacific will gather at the ASEAN Regional Forum, the region’s largest security conference to be hosted Aug. 7 by the 10-nation Southeast Asian bloc. The one-day gathering, which will come amid a series of other ASEAN-led meetings, is virtually the sole multinational event participated by North Korea.

“The North’s side has notified the Philippines that Ri will attend the ARF,” a source said, asking to remain anonymity due to the sensitivity of the matter. 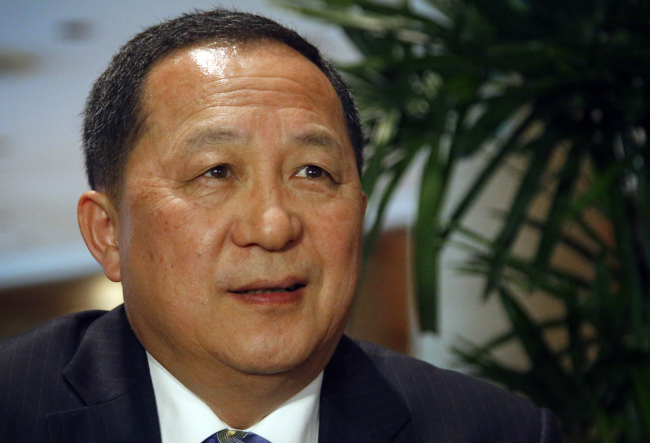 Ri Yong-ho (Yonhap)
The forum will set the stage for a first-ever encounter between Ri and South Korean Foreign Minister Kang Kyung-wha, who took office last month. She is expected to take part in the conference and meet with various other foreign ministers, including from the other four member countries of the defunct six-party denuclearization talks -- the US, China, Japan and Russia.

At a parliamentary questioning earlier this month, Kang said she is seeking to “make the most of” the ARF as a chance to meet with her North Korean counterpart.

Ri made his own debut at last year’s edition in Laos, reiterating Pyongyang’s claim that its weapons program is to defend against the US’ threats and hostile policy.

In preparations for the trip, North Korean Vice Foreign Minister Choe Hui-chol is visiting in the Southeast Asian nation and met with senior officials there, Philippine Foreign Secretary Alan Peter Cayetano said at a news conference.

The meeting was “consistent with our hosting ASEAN with consultations,” Cayetano was quoted as saying, adding he is looking forward to meeting with Ri.