[ The Korea Herald – Send E-mail ]
Prospect of higher electricity rates to turn away foreign firms
By Korea Herald
Published : Jul 26, 2017 - 16:23
Updated : Jul 26, 2017 - 17:48
Concerns are rising that the new government’s policy to phase out nuclear power generation will result in rising electricity prices in the long run, posing an impediment to foreign investment in the country.

Low electricity costs have been cited as a key factor leading foreign manufacturing firms to build factories in Korea despite other unfavorable conditions. 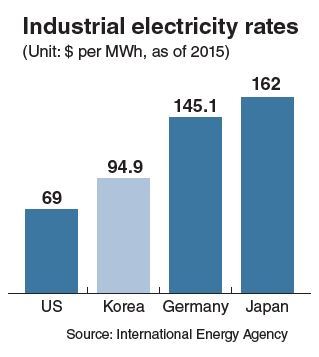 In particular, many Japanese companies have moved production to Korea in search of stable electricity supply at lower rates since Japan stopped all nuclear power plants following the meltdown of Fukushima reactors in the wake of a devastating earthquake and tsunami in 2011.

Japanese firms’ investments in Korea amounted to $3.84 billion in 2012 on arrival basis, accounting for a third of foreign direct investment in the country that year.

As of 2015, industrial electric rates stood at $94.90 per megawatt-hour in the country, compared to $162 in Japan and $145.10 in Germany, according to data from the International Energy Agency.

Such low electricity bills have also helped induce global information and technology companies, including Microsoft and SoftBank, to set up their data centers here.

Foreign firms running production facilities here may not leave the country due to a possible hike in power rates. But the prospect of higher electricity costs will likely hold back foreign companies from making new or additional investments in Korea.

“The disappearance of benefits from cheap electric charges would make foreign investors considering investing here turn to Singapore, Hong Kong, Taiwan and other alternative places,” said an official in charge of one of the eight economic free zones across the country, requesting anonymity.

The declared amount of foreign direct investment in Korea reached $21.3 billion in 2016, but the amount that actually arrived here remained at $10.6 billion, the lowest since 2013. Investments from China, the US and Japan fell by 75 percent, 45 percent and 33 percent, respectively, from a year earlier.

Contrary to the sharp decline in FDI here, investments by Korean companies abroad soared to a record high of $35.2 billion last year, up 150 percent from $23.1 billion in 2007.

This trend is expected to be expedited by the prospect of higher electricity cost, coupled with increases in minimum wages and corporate taxes.

In the latest case of offshoring, a textile company that was the country’s first listed firm decided Monday to move half of its production lines to Vietnam.

Company officials said it would have to give up domestic production altogether if electricity rates rise.

They now argue the energy policy shift will not be accompanied by a rise in electricity charges.

Trade, Industry and Energy Minister Paik Un-gyu told reporters Monday that replacing nuclear power with generation from renewables and liquefied natural gas over the long term would not push up electricity bills, given advances in technology.

Experts note that in relative terms, the burden of electricity costs on Korean companies is far from less than those on competitors in other major advanced countries.

It also seems beyond reach for Korea to lower the costs of renewable energy to the level of nuclear power or fossil fuels, even if technology continues to improve, given high land prices and limited areas available for generation with renewables in the country.

According to estimates by the Korea Nuclear Energy Agency, it would take an area three times as large as Seoul to build solar-generating stations to make up for the phase-out of nuclear and coal-fired power plants as planned by the Moon administration.

A recent analysis by the Korea Energy Economics Institute forecast the country’s power generation cost would increase by 21 percent from the 2016 level by 2030 on the assumption that Moon’s policy is carried out, putting upward pressure on electric rates.

“A 20 percent increase in electric charges is projected to push up inflation by an additional 0.46-1.16 percentage points and reduce gross domestic product by 0.7-0.93 points,” said Roh Dong-seok, a KEEI researcher.

In contrast to concern over a possible rise in electricity costs here, other countries such as the US, Japan and Taiwan have lowered industrial electric rates in recent years. The Japanese government made it clear it would expand nuclear power generation in its basic energy plan under review this year.

Experts call on the Moon government to work out measures to prevent its energy policy shift from hampering efforts to attract more foreign investors, saying it is needed to strengthen support in other areas, including taxation, employment and research.