The South Korean government will unveil its plan to increase taxes for the super rich and biggest businesses next week to secure funds for expanded welfare costs over the next five years, the country's top economic policymaker said Tuesday.

"The tax-hike issue has been raised in government policy meetings, with the ruling party calling for it," Finance Minister Kim Dong-yeon said at a press conference on the new Moon Jae-in government's economic policy plan. "The ministry is considering the issue carefully and will announce the final version next week." 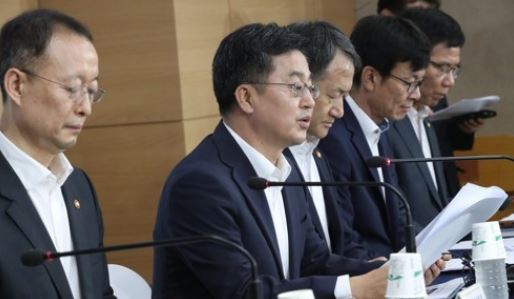 But he said the government is taking a prudent stance in raising nominal income and corporate tax rates in order to strike a balance between strengthening taxation and realizing justice in taxation.

Kim's comments came as the issue of a tax increase has emerged as a hot potato in politics as the governing Democratic Party mentioned a potential tax hike by calling it a "normalization" of the taxation system or a pursuit of a "more equitable" regime.

While on the campaign trail, Moon hinted at corporate and income tax hikes, and a removal of tax exemptions and benefits to secure funding to push through his various agendas.

Moon has vowed to create some 800,000 public jobs during his five-year term, grant an allowance to young jobseekers and offer public residence to newlyweds at affordable rent.

South Korea will need an additional 178 trillion won ($159.6 billion) over the five-year period to fulfill Moon's pledges, according to government data. (Yonhap)