The CCSI has moved upward six straight months and been in optimistic terrain for four consecutive months, inching closer to the 111.4 recorded in January 2011. However, the increase in July was close to “insignificant,” Park Sang-woo, an official at the BOK, told reporters. 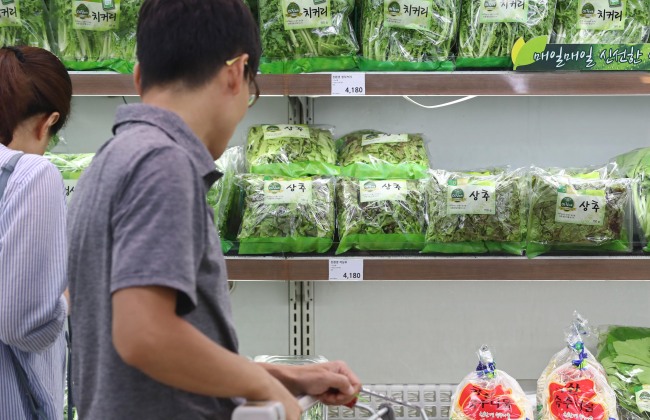 Since posting an eight-year low in January at 93.3 after declining three months in a row, the index has been on a gradual rise. It hovered between the high-90s and 110 for nearly six years, but dropped 6.3 points in November 2016 upon the corruption scandal that resulted in former President Park Geun-hye’s impeachment.

The CCSI consists of six consumer survey indexes that gauge consumers’ current views and outlook for the national economy and livelihood, as well as their views on household income and spending. An index above 100 represents optimism and below 100 shows pessimism.

Optimism was weaker in terms of spending and outlook for the economy compared to the previous month. But this was offset by higher optimism toward the current economy, positive current views and the outlook on livelihood. The outlook for household income remained flat.

Other than the survey indexes comprising the CCSI, the survey index measuring employment opportunity saw a visible drop of 11 points to reach 110. Created in July 2008, the total average of the index stands at 86.

The consumer survey index linked to wage level saw a 2 point rise to reach 124, marking an increase for six consecutive months. Since its creation in January 2013, the total average of the index has stood at 110. Park of the BOK said the effects of the minimum wage hike announcement have not been fully reflected.

The BOK’s data also indicated the consumer perceived price inflation remained unchanged at 2.5 percent, while the inflation forecast slid 0.1 percentage point to 2.5 percent in July. The expected shortage in crop supply due to the torrential rain that has swept the nation over several weeks has not been reflected, Park said.