The move is in line with a campaign pledge by President Moon Jae-in that the new administration aims to ease financial burdens on consumers by assessing "propriety" of commission fees charged on banking and financial services. 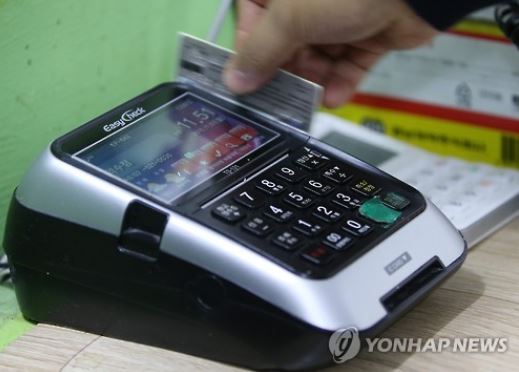 (Yonhap)
Starting next Monday, credit-card processing fees for small merchants with an annual revenue of between 300 million won ($268,312) and 500 million won will be reduced by 0.7 percentage point to 1.3 percent per transaction, the Financial Services Commission said in a statement.

For small merchants with an annual revenue between 200 million won and 300 million won, the merchant fees will be cut by 0.5 percentage point to 0.8 percent per transaction.

The cut, which was approved by a Cabinet meeting earlier Tuesday, would affect about 267,000 small merchants and cut revenues of credit-card firms by about 350 billion won a year, according to the commission. (Yonhap)