During a forum on financial strategy, Moon also underscored that the country's financial policies should be "people-oriented," inclusive, balanced and transparent, and involve citizens' participation.

"There has been a blind belief in a small government, but in order to overcome the structural limits of low growth and polarization and create an actual change in the quality of life for citizens, (the government's finance) must play a more active role," 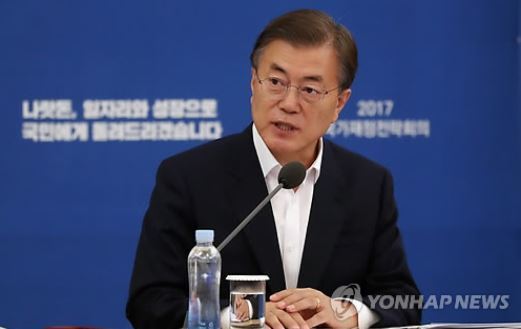 Moon, then, called for a "fundamental" shift in the country's economic playbook.

"There should be a shift in our thinking towards one that is centered on people and their households... That is the people-oriented economy and citizens' growth that the new government has been pursuing," he said.

"At its core is of course job creation... Through jobs, we can raise household income, revitalize domestic spending and induce economic growth, which will, in turn, lead to the creation of new jobs," he added.

The president was referring to his income-led growth strategy, an economic formula aimed at addressing income disparities and boosting growth by creating jobs and increasing household revenue.

In the meeting, Moon also stressed the need to foster new startups by promoting creativity and innovation in the industrial sectors, and ensure that the country can stay ahead in the fourth industrial revolution marked by the convergence of leading-edge technologies such as artificial intelligence and virtual reality. (Yonhap)