[ The Korea Herald – Send E-mail ]
[News Focus] How will class action suits be introduced in Korea next year?
By Korea Herald
Published : Jul 20, 2017 - 17:28
Updated : Jul 20, 2017 - 17:28
After some two decades of disputes, class action suits for basic consumers may be introduced next year, according to the top 100 policy plans announced by the Moon Jae-in administration on Wednesday.

The tool to allow consumers who have suffered damage from products to benefit en mass from compensation rulings without directly participating in a legal battle has always been a hot potato for the preceding governments and legislators.

Despite President Moon Jae-in’s determination to promote consumers’ rights, however, the class action system is continuing to cause a stir among skeptical observers, some doubting the efficiency and others concerned about possible cases of abuse.

In announcing the five-year policy plan, the State Affairs Planning Advisory Committee said it aims to realize a “vibrant and fair economy,” vowing to enhance monitoring capacities for fair trade and to strengthen consumer damage relief -- the latter including a class action system in the consumer field. 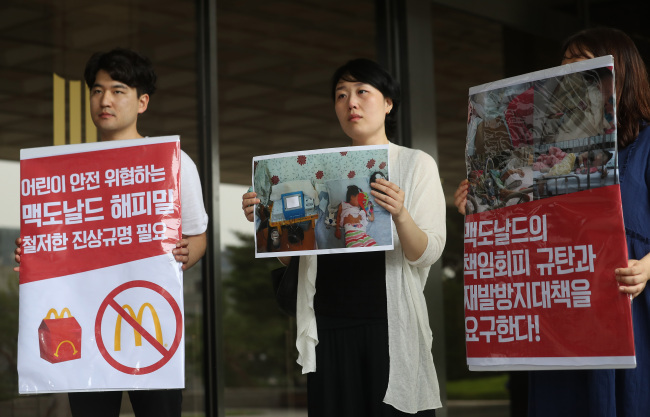 (Yonhap)
A class action or representative action is a type of lawsuit, more typically effective in the US, allowing a group of people to be represented collectively by a specific member or a subset.

Under the system, victims of mass consumer good damages may receive the same amount of compensation as the winning plaintiffs who participated in a lawsuit, should they meet the prerequisites of the corresponding damage. The lawsuit model was introduced in South Korea in 2005 but was limited to securities-related cases only.

Seeking to draft an implementation plan within the year and effectuating a related law next year, the government may either seek to revise the securities-related class action act or legislate a separate law for the consumer-related class action, according to the presidential advisory panel. Relevant bills coming to law, however, are likely to entail an expansive political standoff between the ruling and opposition parties.

Rekindling the long-pending talks on the consumer class action was the case of toxic humidifier disinfectants, which were blamed for scores of deaths and irreversible injuries to product users.

While the first cases of deaths were reported in 2011 and the first lawsuit raised in 2012, the corresponding case is still ongoing at the appeal court, likely to drag on for more years.

Even if the 64 victims and families were to win their case, the effect of the final court ruling would only reach those listed as plaintiffs, with no class action suit system to weld all of the victims into a collective group.

Another recent case adding to the debate on consumer class action was that of a 4-year-old child who experienced a critical kidney failure after consuming a hamburger at fast-food chain McDonald’s.

The child’s hemolytic uremic syndrome, which left her with a lifetime of dialysis, was attributable to an undercooked burger patty, according to her family.

Though this was the first suit to be filed against a food manufacturer related to HUS, it is possible that other suits may follow as a number of consumers have been claiming to have eaten undercooked products at McDonald’s.

Past administrations had made attempts to expand the class action suit to the consumer sectors, especially whenever a major food product defect scandal broke out.

In 2008, former President Lee Myung-bak called for a class action system for food damage victims and his successor Park Geun-hye also vowed to expand the securities class action onto all other sectors during her 2012 election campaign. Both moves were thwarted by a fierce backlash from the related industries, which cited the likeliness of malicious lawsuit abuses.

The Korea Economy Research Institute, affiliated with the Federation of Korean Industries, reiterated such concerns earlier this year. In a report released in January this year, the institute asserted that class action suits fundamentally involve dangers of abuses which may consequently lead to social and economic losses.

Consumers and civic groups mostly cheered for the government‘s latest move, but also called for improvement, pointing out to the flaws of the current securities class action system.

“It took 12 years for the first winning case of securities class action could take place, mostly due to the complicated procedures,“ the Citizens Coalition of Economic Justice said through a statement on Wednesday.

“The whole point of the class action system is to offer a more efficient relief solutions for victims of mass damages.”