[ The Korea Herald – Send E-mail ]
‘NK leader seeks peace treaty talks with US’
By Shin Hyon-hee
Published : Jul 19, 2017 - 17:05
Updated : Jul 19, 2017 - 17:05
North Korean leader Kim Jong-un has recently instructed diplomats to ramp up pressure on the US to foil its denuclearization demand and bring it to the negotiating table for a peace treaty, a news report said Wednesday.

The young ruler sent an “urgent directive” to the country’s overseas diplomatic missions while the Group of 20 conference was taking place in Germany on July 7-8, Japan’s Asahi Shimbun reported, citing unnamed sources familiar with North Korea affairs. It called for an initiation of negotiations for a peace treaty with the US by injecting conviction that it is “impossible” for Pyongyang to abandon its nuclear program.

“The Moon Jae-in administration is providing a golden opportunity for us. Before hostile forces cause a stir, we must realize our duty of reunification,” Kim was quoted as saying in the text. 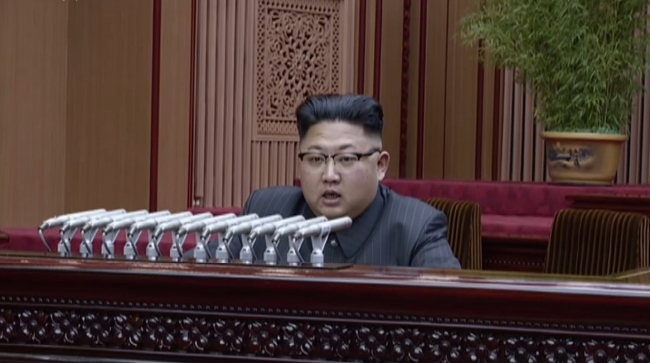 This image captured from North Korea`s official Korea Central Television shows leader Kim Jong-un speaking at an award ceremony on July 13 for officials involved in the country`s test of an intercontinental ballistic missile on July 4. (Yonhap)
The report could not be verified immediately. But if confirmed, it may indicate Pyongyang’s intention to take advantage of Moon’s pursuit of a recovery of inter-Korean communication channels and dialogue.

The regime could also seek to drive a wedge between Seoul and Washington, given the Donald Trump administration’s skepticism about the possibility for meaningful progress on denuclearization talks.

As of Wednesday afternoon, Pyongyang remains mum about Seoul’s proposal on Monday for military and humanitarian talks.