Based on basic salary information disclosed by the government and expenditure analysis of a ward office in Seoul picked as a representative sample, it costs about 179.9 million won a year to keep a public servant employed, the association said.

Salary levels of government workers have become news after political confrontation over President Moon Jae-in's drive to hire more civil servants as a means to increasing stable jobs. The opposition camp is against the proposal that is one crux of the extra budget awaiting parliamentary approval. Opponents claim hiring more public servants will lead to greater burden for taxpayers down the line. 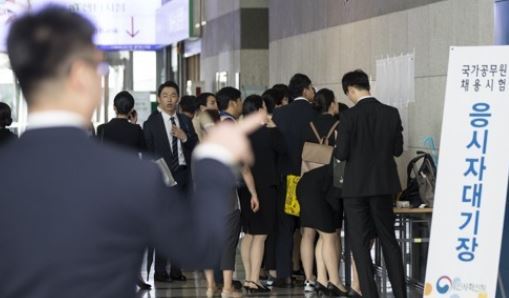 (Yonhap)
The Moon administration has allocated 8 billion of the 11.2 trillion won extra budget to creating jobs in the government.

The association estimated the average pay by setting the monthly salary at 5.1 million won and adding various fringe benefits such as a subsidy for national pension and social insurance. The average annual pay is equal to the top 7.15 percent of taxpayers this year, according to the estimate.

Considering that a government employee usually works 28 years until retirement, it would cost 3.02 billion won to keep a worker in his or her post during the period, the association said. (Yonhap)