[ The Korea Herald – Send E-mail ]
Swiss couple found on glacier 75 years after disappearance
By AFP
Published : Jul 19, 2017 - 09:51
Updated : Jul 19, 2017 - 09:51
A Swiss couple that disappeared in the Alps 75 years ago has been found preserved in a receding glacier, ending decades of uncertainty for their family, relatives and media said Tuesday.

The bodies were found lying near each other in the Diablerets massif in southern Switzerland on Thursday, along with backpacks, a bottle, a book and a watch, according to Le Matin daily.

A DNA search has been planned to definitively establish their identities, but Maryline Dumoulin told AFP police were “99 percent” certain the remains were of her grandparents, who went missing on August 15, 1942. 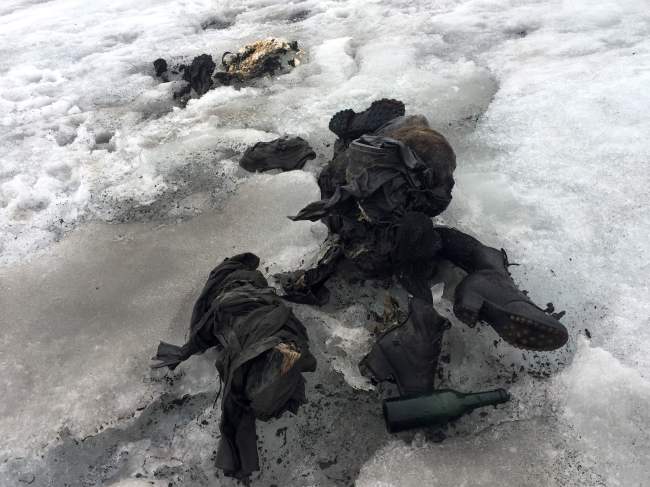 This handout picture distributed on July 18, 2017 by the Swiss cable cars company Glacier 3000 shows the mummified remains of a Swiss Couple who went missing 75 years ago and who were found in a glacier in the Diablerets mountains, in southern Switzerland.(AFP-Yonhap)
Marcelin Dumoulin, a 40-year-old shoemaker at the time, and his wife Francine, a schoolteacher aged 37, had left their village of Chandolin in Valais canton on foot before disappearing, orphaning five sons and two daughters.

Their daughter, Monique Dumoulin, told AFP it was the first time her mother had joined her father for that type of excursion. She had previously always stayed home, either because she was pregnant, or to look after her young children.

The couple had been hoping to make an overnight trip to check up on their cattle, which were being kept in Grilden, an alpine pasture in neighbouring Bern canton.

Monique Dumoulin said that the sky had been clear when her parents set out, but that clouds later darkened the area, likely making it difficult to ensure solid footing on the glacier's surface.

“My uncle had time to see my parents one last time with his binoculars," she said in a phone interview.

The bodies were found on Tsanfleuron, a glacier at an altitude of 2,600 metres (8,500 feet), by an employee of the Glacier 3000 ski resort, the resort's director, Bernard Tschannen, told Le Matin.

“It was a man and a woman wearing clothes from the last (world) war," Tschannen was quoted as saying. “The ice preserved them perfectly and their belongings were intact."

Tschannen said the couple was found near an old footpath linking the cantons of Valais and Bern.

Marceline Udry-Dumoulin, who was four the day her parents went missing, told Le Matin that she climbed the glacier three times after their disappearance, “constantly wondering what had happened to them.”

The search was called off after several weeks and the Dumoulin children -- aged two to 13 at the time -- were sent to live with relatives and in foster homes.

“We spent our whole lives searching for them, without stopping. We never thought we'd be able to give them the funeral they deserved,” Udry-Dumoulin told Le Matin.

Granddaughter Maryline said that aside from the DNA tests, her grandfather's distinctive watch and backpack, which he made himself, could help identify the bodies.

She said her two aunts -- her grandparents' only surviving children -- were “happy they will finally be able to mourn.” (AFP)