Maj. Gen. D. Scott McKean took over the command from Maj. Gen. Theodore D. Martin in a ceremony held at Camp Casey in Dongducheon close to the Demilitarized Zone.

McKean will double as leader of the South Korea-US Combined Division, which includes the 2nd Infantry Division and a South Korean Army brigade. 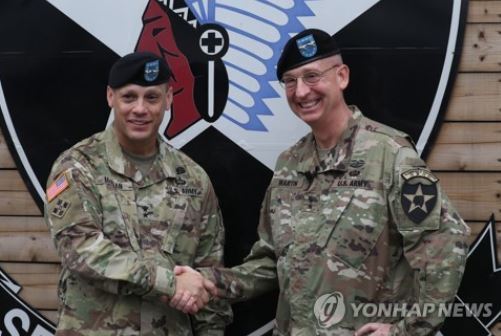 Maj. Gen. D. Scott McKean (L), the new commanding general of the US Forces Korea`s 2nd Infantry Division, shakes hands with his predecessor Maj. Gen. Theodore D. Martin in a change of command ceremony held at Camp Casey in Dongducheon, Gyeonggi Province, on July 18, 2017. (Yonhap)
He is no stranger to the division's mission as he served on the Korean Peninsula as a captain over 22 years ago, the unit said in a press release.

"The culture of Fight Tonight, of the physical and mental toughness needed by all Soldiers -- these attributes are needed even more so today as we stand ready to deter war, and if necessary, to annihilate those that endanger the Republic of Korea," he was quoted as saying.

Before taking the post, he served as chief of the Office of Security Cooperation-Iraq at the US Central Command and commandant at the US Army Armor School.

Martin, meanwhile, finished his two-year stint as the commander of the 2nd Infantry Division, nicknamed "Warrior Division" and "Second to None." It's the core element of the 28,500-strong US Forces Korea.

Having overseen the creation of the US Army's only forward-deployed combined division, he will reportedly work at the Pentagon.

In an interview with Yonhap News Agency last month, Martin said he will return to Korea any time if it's in need of help.