The evolving dining industry in Seoul has transformed blue-collar communities into hipster havens, where artists and expats alike relocate to open their restaurants and cafes. With food comes locals, drawn by the aesthetically pleasing interiors and foods on a platter, housed inside abandoned warehouses and narrow alleyways.

Industrial neighborhoods, like Mangwon-dong, are only in their beginning stages of revival. Mangwon-dong’s main roads are crowded with open-air markets and low-cost produce, people on bicycles riding from one destination to another. The contrast between the modernized alleyways and the sound of market owners listing their prices for the day is palpable as visitors stroll through the neighborhood. 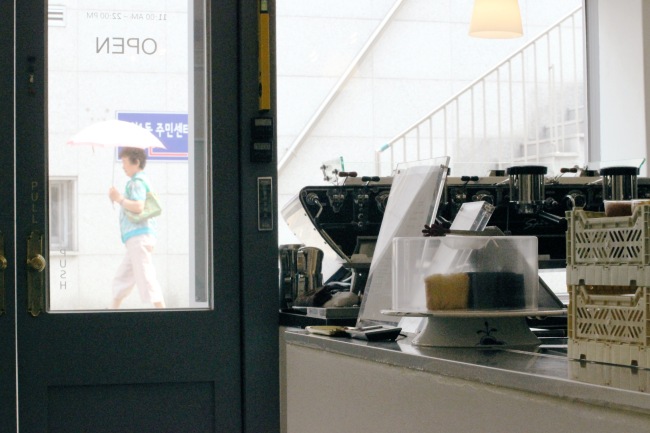 Deep Blue Lake is a Mangwon-dong cafe most known for its orange-flavored desserts and drinks. (Paige Shin/The Korea Herald)
Mangwon-dong is home to the underbelly of a growing dining industry. Deep Blue Lake, which sits inconspicuously against a row of apartment buildings, serves coffee and cake in a small, minimalist space. With three stories that can fit a maximum of six parties each floor, the cafe is almost always full.

Eateries like Deep Blue Lake draw in those who hope to open shop in low cost locations. As older restaurants and markets begin to move out, brand new dining businesses find opportunities to move in.

“The rent is low in these areas, at least for now,” said a resident. “Most shop owners moved here because it was affordable. But the noise pollution has gotten worse."

With crowds gathering in front of cafes attached to apartment buildings, the narrow streets are no longer quiet, and they are crowded with pedestrians. Zapangi is one example. An extension off of a residence, the cafe almost always has a line outside its doors. 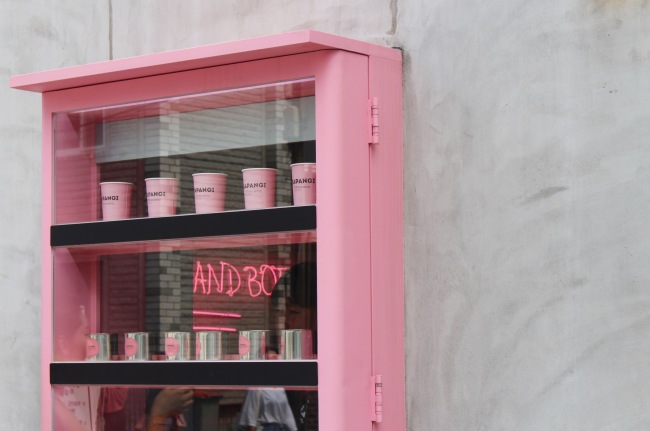 Zapangi is a Mangwon-dong cafe popular for its assortment of milk teas and cakes. (Paige Shin/The Korea Herald)
But the people in line are not waiting to be seated. They are waiting to take pictures with the cafe’s door. Zapangi shows how the quality of food is not the only factor that attracts visitors: it is also the aesthetic. Still, the cafe's selection of fruit cakes and milk teas do not disappoint.

“What brings people to cafes is how photogenic the spaces are,” said a customer. “Food is important, but so is the look of the interior.”

That does not apply to all destinations. Itaewon has always been known for its gritty back streets, piled with abandoned markets. Within these back roads is Linus BBQ, one of Seoul’s most popular southern American eateries. Founded by Alabama native Linus Kim, the restaurant is considered to have the most authentic flavor of southern barbecue.

The open-air restaurant with large picnic tables is reminiscent of a backyard, almost as if customers are enjoying their briskets and pulled pork in the US. But there is little aesthetic value in the interior as there is with the food, which includes a large platter stacked with hamburger buns and shoestring fries.

Itaewon is still a far cry from being its cleanest, but the rate of its development is tremendous. The back roads stretching from the main street to Gyeongnidan are perfectly paved and lined with restaurants of all cuisines. They have become so commercialized that foreigners and locals alike walk in crowds, shoulder to shoulder, searching for a dinner spot. 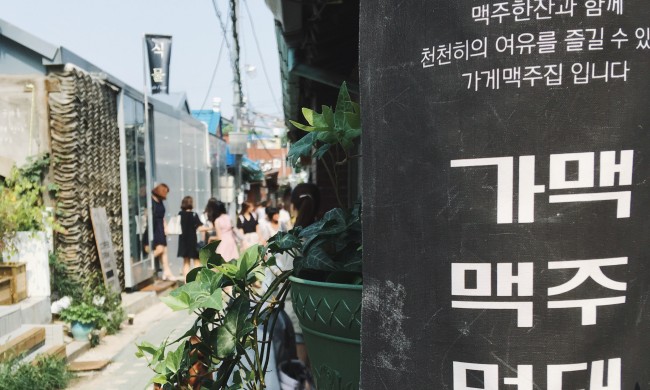 Sikmul is a hybrid coffee shop and cocktail bar in Ikseon-dong. (Paige Shin/Korea Herald)
For the traditional yet artsy, Ikseon-dong has become a popular hangout. The hanok-styled homes are used as a foundation for the artistic space that grows there. The village is known to be a hanok island, most of the buildings dating back to the 1920s.

“Preservationists were alarmed at the extent of the changes and began to complain that the scale of the renovations went beyond what was necessary and, in some cases, equaled new construction,” wrote Fouser, describing Bukchon, a hanok village that developed in a similar pattern as Ikseon-dong few years prior.

Despite this, local shop owners believe that they are doing the best they can to keep the spirit of Korean history alive, by attracting a younger generation of visitors to the hanok-styled exteriors and contemporary interiors. Iksundada, a company owned by two female entrepreneurs Park Han-ah and Park Ji-yun, bought and developed numerous hanok buildings in the neighborhood. Through joint investments, the company plans on buying more buildings to prevent rent increases in order to safeguard businesses set up by young entrepreneurs.

Sikmul, an all-day bar that doubles as a coffee shop, is run by hipsters dressed in Hawaiian shirts and cropped jeans. Down the narrow alleyway is 12 Months, a grocery store and high-end food court. A few steps away is the Turtle Supermarket, where customers can grill dried fish over a fire. The shop owners also host community meetings once a month to discuss ways to prevent corporate-financed stores from moving into the area. It shows how quickly and drastically the neighborhood has developed, with food as the catalyst.