Samsung Electronics said Tuesday it kicked off efforts to recycle parts from the Galaxy Note 7 phablets in environmentally friendly ways after the product was discontinued last year due to faulty batteries.

The South Korean tech giant released the Galaxy Note FE, a refurbished version of the ill-fated Note 7, earlier this month. The Note FE kept key features of the flagship but came with a lower battery capacity amid safety concerns. 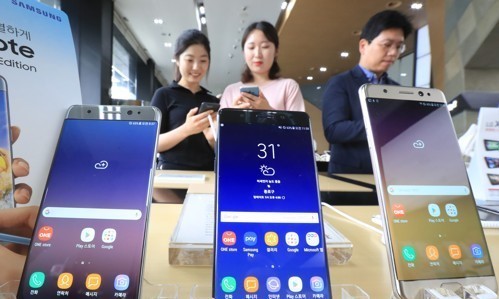 Visitors take a look at the Galaxy Note FE at a shop in Seoul in this file photo taken July 7, 2017. (Yonhap)

Samsung said it will recycle parts from Galaxy Note 7 units that have not been changed and resold to minimize negative impacts on the environment.

The company said it plans to recycle OLED display modules, memory chips and cameras while selling other key parts as well.

It said the recycling effort will allow it to collect some 157 tons of resources, such as gold, silver and copper, from the process. It also plans to join forces with recycling firms from home and abroad to utilize parts from the phablet.

The decision came in response to the demand from activists' groups, which called for environmentally friendly processing of the Galaxy Note 7 phablets.