“I do not believe that FSC officials would have jumped to conclusions with certain intentions and given favors,” Choi said during a confirmation hearing at the National Assembly. But Choi added he would take due measures, if the approval procedure was found to be wrong. “I will look into the case, when I’m incumbent, and will correct any wrongdoing,” he said. 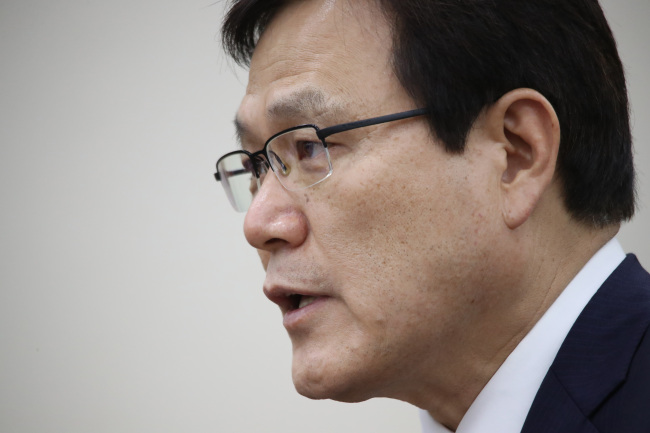 FSC Chairman nominee Choi Jong-ku (Yonhap)
The remarks followed an allegation raised by ruling Democratic Party of Korea Rep. Kim Young-joo on Sunday that Woori Bank, holding 10 percent of K bank shares in 2015, earned the preliminary approval as the shareholder, even though it fell short of meeting the minimum capital adequacy ratio set by the Banking Act and the Regulation on Supervision of Banking Business.

The ratio applies to tier 1 capital as defined by the Bank for International Settlements, mostly reserves and common stock.

A stakeholder banking entity with a stake in the new bank of between 4 percent and 10 percent should have a BIS ratio of above 8 percent and above the average for Korean banking firms in the previous quarter, according to Kim’s interpretation of the Banking Act.

Woori Bank had a 14 percent BIS ratio as of the second quarter of 2015, lower than the local banks’ average BIS ratio of 14.08 percent, which led to a rejection by the Financial Supervisory Service during its screening process in September 2015.

The only stakeholder to be reviewed under the regulation then was Woori Bank which then submitted its BIS ratio of the previous three years, estimated to stand at 14.98 percent, to the FSC, which had broader oversight than the FSS. The FSC granted Woori Bank preliminary approval in November of the same year, seeing the ratio as higher than the local banks’ average adequacy ratio for the cited period, at 14.13 percent, overpowering the FSS’ rejection.

Kim noted that a set of requirements on stakeholders’ minimum BIS ratios have since been discarded, after a revision proposed in April 2016 was passed before the final business approval in December 2016.

K bank was one of the two internet-only banks that gained final approval, along with Kakao Bank. The other contender, I bank, failed to get approval, which Kim called “the innocent third party which could not compete on a level-playing field.”

The FSC said Sunday that the approval of the shareholder was made under a “fair judgement.” The regulator claimed there was room to give K bank preliminary approval, since the BIS ratio did not necessarily have to be that of the previous quarter, which Kim called an “authoritative interpretation.”

The FSC also said it had deleted the article on the minimum BIS ratio in 2016, in a bid to seek balance among contenders. The regulation on the adequacy ratio was applied only to banks and equity firms and not mandated to insurers and capital market business entities. Kim, however, argued that the policymakers feared K bank would not be eligible for approval, citing that at the moment of revision Woori Bank’s BIS ratio fell to 13.55 percent as of March 2016.

K bank started the service in April. Telecommunications giant KT is leading the K bank consortium made up of 21 firms, by holding 8 percent. Woori Bank is one of the four firms holding the largest share of 10 percent.

Choi had served as first senior deputy governor of the FSS in 2013. Choi stepped down the following year.

During the confirmation hearing, Choi also raised the need for better protecting financial consumers and transparency in reviewing the eligibility of investment banks’ shareholders. He also called for restructuring of the businesses heavy industry, while arguing that the future of Kumho Tire should be in the hands of bondholders.