South Korea's corporate lobbies on Sunday expressed concerns over a decision to hike the minimum wage for next year, saying it could worsen business conditions and hamper job creation. 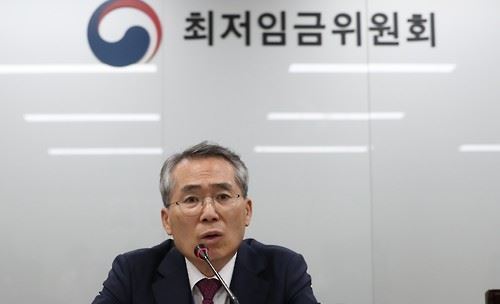 Park Joon-sung, the chairman of the minimum wage council, announces the country`s minimum wage for next year at the government complex in Sejong on July 16, 2016. The new minimum wage will be raised by 7.3 percent to 6,470 won ($5.70) per hour in 2017. The trilateral council is represented by labor, management and the general public. (Yonhap)
A panel representing the government, labor and management decided Saturday to increase the minimum hourly wage to 7,530 won ($6.64) for 2018, up 16.4 percent from this year. It is the highest on-year increase after a 16.6 percent hike in 2000.

"It was a decision that ignored small and mid-sized businesses which are already suffering from harsh economic conditions," the Korea Employers Federation said.

"While there is social consensus for the need to increase the minimum wage, if it hikes too fast, the burden mainly falls on small business owners and could eventually lead to a reduction in new jobs," said an official at the Korea Chamber of Commerce and Industry.

"The minimum wage hike doesn't really have a direct influence on big business groups, but such a rapid hike could be regarded a signal that the current administration is siding with the labor circle more than with the business community," an official working at a local conglomerate said.

President Moon Jae-in has promised to increase the minimum wage to 10,000 won per hour before his five-year term ends in May 2022. (Yonhap)