[ The Korea Herald – Send E-mail ]
US Embassy in South Korea promotes LGBT right
By Bak Se-hwan
Published : Jul 13, 2017 - 16:15
Updated : Jul 13, 2017 - 18:45
A rainbow banner hung on the facade of the US Embassy building in downtown Seoul on Thursday, in a show of support for the upcoming parade of gender and sexual minorities.

According to the US Embassy, the banner, whose multicolor stripes symbolize gay pride, is to “support and participate in this year’s Queer Culture Festival” for lesbian, gay, bisexual, transgender people, or LGBT. 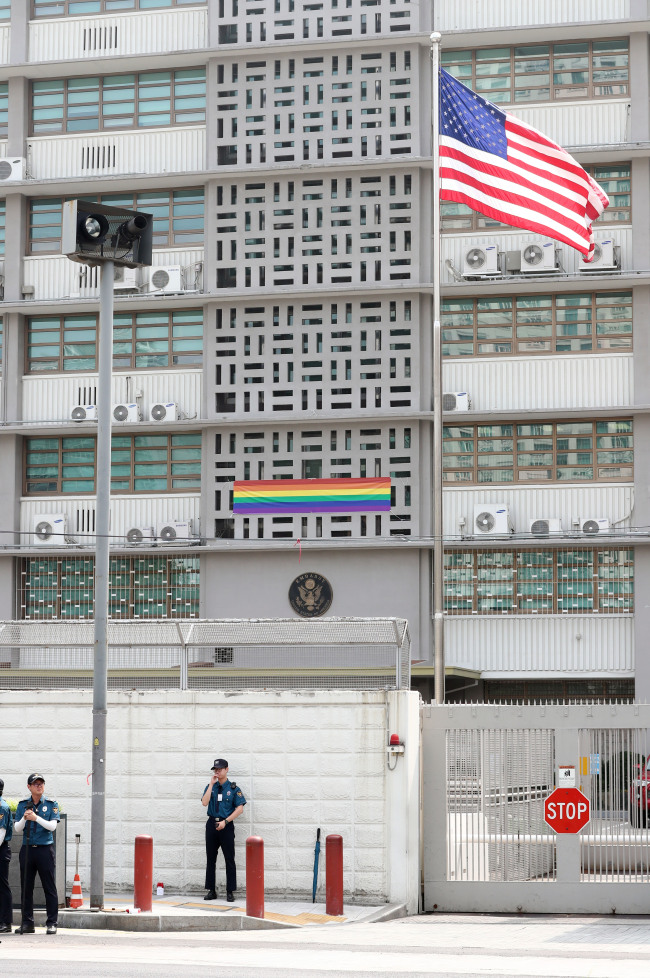 The US Embassy in Seoul‘s Jongno District. (Yonhap)
“The US Department of State affirms its solidarity with the human rights defenders and civil society organizations working around the world to uphold the fundamental freedoms of LGBTI persons to live with dignity and freedom,” the embassy said in a written statement, using a term that includes intersex people.

“We will continue to support the human rights of LGBTI persons together with like-minded governments, businesses, and civil society organizations globally. The United States remains committed to human rights and fundamental freedoms for all persons,” the official added.

From Friday to Saturday, the colorful parade is to make its way through the city, starting from Seoul City Hall. The country’s annual Queer Culture Festival invites all those in favor of same-sex marriage. South Korea does not recognize same-sex marriages.

“The Korea Queer Culture Festival aims to promote minority groups whose human rights have been long neglected by the majority,” said Kang Myeong-jin, chief organizer of the nonprofit festival.

“We should encourage people to break free of oppression and march out to achieve our rights,” Kang added.

While homosexuality is not a crime in South Korea, LGBT people live largely on the fringes of society, as the majority of Koreans remain either indifferent to or intolerant of sexual minorities.