Kia’s SUV lineup now ranges from the full-size Mohave and mid-size Sorento, to the Sportage, hybrid Niro and compact Stonic.

With the Stonic, Kia Motors aims to target consumers in their 20s and 30s, who prioritize price, fuel economy and design, the company said.

Starting Thursday, Kia Motors’ subcompact SUV Stonic went on sale in the domestic market, with the aim of boosting the company’s sales by meeting the growing demand for crossover vehicles worldwide.

Preorders of the model reached 1,500 units since June 27, when the company first introduced the model.

Kia Motors aims to sell 6,000 units of the Stonic in Korea this year and 18,000 units in 2018. It will launch the gasoline-powered Stonic here before the end of this year, it added. 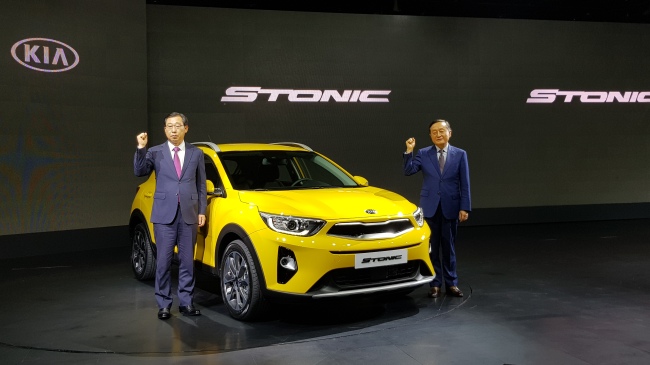 The Stonic comes with a seven-speed dual-clutch transmission and a 1.6-liter diesel engine with 110 horsepower. Its fuel economy is said to reach an average of 17 kilometers per liter. The vehicle is priced between 19 million won ($16,700) and 23 million won, depending on the options chosen.

Kia Motors also plans to export the Stonic to overseas markets such as Europe and the US, where demand for small SUVs is rising fast.

Kia Motors plans to sell both the gasoline- and diesel-powered Stonic in Europe within the second half of this year, according to the company’s Marketing Director Seo Bo-won. The timeline for US-bound shipments, however, has not been decided.