The woman was assaulted Saturday after becoming intoxicated during dinner with the diplomat and driven to his home in Addis Ababa, officials said.

(Yonhap)
Based on preliminary fact-finding questioning, a ministry official said the diplomat invited her to the dinner to “express gratitude” for her help at work and they drank three bottles of wine together. But the two provided conflicting accounts on what happened at his place and how.

The woman reported the incident to the ministry headquarters on Monday via a hotline. She also obtained a medical report in line with a consultant’s advice and returned to Seoul on Tuesday, the official said.

“We are currently conducting an interview with the victim at a third location and planning a full-fledged investigation as soon as the alleged offender, who was recalled home, arrives tonight,” the official told reporters on customary condition of anonymity.

“Under the no-tolerance principle, if it’s confirmed true, we will take stern action against him, such as by pursuing criminal punishment and severe disciplinary action according to the law and due procedures.” 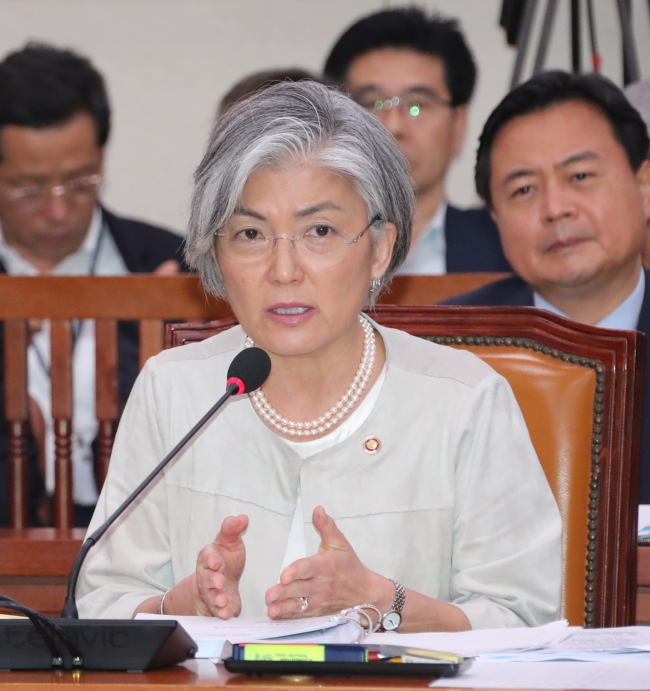 Foreign Minister Kang Kyung-wha speaks at a parliamentary session on Tuesday. (Yonhap)
The incident is likely to deal a blow to the agency, which has grappled with a string of sexual crimes by diplomats serving overseas.

In December, the ministry sacked a working-level diplomat at the embassy in Chile after he was found to have abused at least two teenage Chilean girls. It also took disciplinary action against an ambassador in the Middle East over allegations of verbal sexual harassment last year.

New Foreign Minister Kang Kyung-wha, who has pledged sweeping reforms and revival of strong office discipline for which a task force has been set up, displayed “great anger” over the latest case and called for a swift and thorough probe, the official added.