Foreigners net bought $9 billion worth of South Korean stocks during the January-June period, the second largest only after Taiwan's $9.4 billion, according to the statistics by Yuanta Securities. 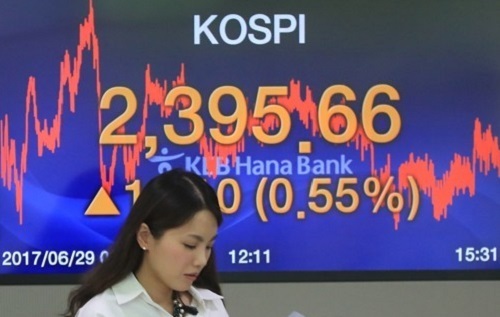 (Yonhap)
The benchmark Korea Composite Stock Price Index jumped 18 percent to 2,291.79 as of June 30 from the end of last year, marking the highest rise among emerging economies.

Vietnam posted the second-highest increase rate at 16.8 percent, trailed by India at 16.1 percent.

Analysts forecast the continuation of "Buy Korea" by foreigners for the coming months, saying sound corporate earnings and expectations of the global economic recovery will be able to offset concerns over North Korea's firing of an intercontinental ballistic missile and possible capital flight from U.S. rate hikes.

"We do not see any risk of overvaluation of the rising stocks,"

Min Young-kyu of Yuanta Securities said. "South Korea's earnings per share is expected to be the highest among 46 countries in the Morgan Stanley Capital International index. However, South Korea's stock prices are currently valued at the third lowest." (Yonhap)