John Schilling, an aerospace engineer with expertise on North Korean missiles, presented the analysis in an article to the 38 North website, noting that the North's Hwasong-14 ICBM could fly as far as 9,700 kilometers with a 500 kilogram payload if fully developed.

Moreover, the missile has a detachable "payload shroud" that can house multiple payloads or a single warhead and a number of decoys and penetration aids designed to defeat US missile defenses, the expert said.

"If the Hwasong-14 is put together the way we think it is, it can probably do a bit better than that when all the bugs are worked out ... The North Koreans won't be able to achieve this performance tomorrow, but they likely will eventually," Schilling said.

"A range of as much as 9,700 kilometers, approximately the distance from North Korean launch sites to the US naval base at San Diego, would be possible with a 500 kg payload," he said. 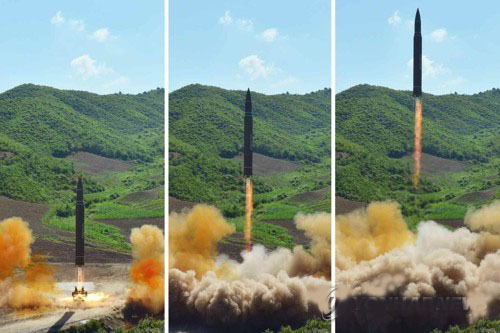 (Yonhap)
The expert said that even though the missile has a "payload shroud," the North won't be able to master the technology to put multiple warheads in it for the next 15 years. Instead, the regime is expected to focus on putting a single warhead and multiple decoys and penetration aids in it, he said.

"The US national missile defense system in its current state is limited and unreliable, working only about half the time in tests. But North Korea has to consider that deploying an operational ICBM would motivate the United States to improve its defenses," Schilling said.

"They can't possibly hope to build more ICBMs than the US can build missile defense interceptors. But if they can put a dozen or so effective decoys on each missile—that might be enough to maintain a credible deterrent," he said. (Yonhap)