The benchmark Korea Composite Stock Price Index closed at 2,382.10, up 0.09 percent Monday compared to the Friday closing, on the back of institutional buying. 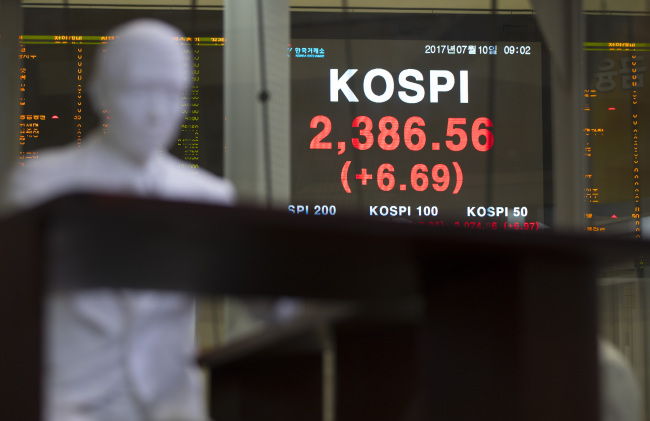 Local currency rose by 4.8 won against the greenback from Friday, leading to the return of won-dollar exchange rate at below 1,150 won in a week to 1,149.5 won.

This came after Wall Street gains on Friday with forecast-beating jobs report for June. On Friday, the S&P 500 jumped 0.64 percent, Dow Jones Industrial Average soared 0.44 percent, while the Nasdaq Composite added 1.04 percent, after US showed 47,000 more jobs were created last month than the expected 173,000 jobs.

Local analysts expressed mixed reactions on whether the drag on the South Korean markets last week would linger.

“We see the geopolitical risk had already been reflected in the won-dollar exchange rate last week, while the offshore cash outflow remained lower than the earlier forecast,” Min Gyung-won, an analyst at NH Futures, wrote in a Monday note.

“The central banks‘ policy direction to normalize the monetary policy will bring fresh focus on Kospi,” Park Sung-hyun of Samsung Securities wrote in a Monday report.

“Sell-offs on tightening occur when a stock has valuation concerns, and the Kospi stocks with less valuation pressures are expected to benefit from this.”

Ko Seung-hee of Mirae Asset Daewoo, meanwhile, said, “North Korea risk has room for making further impact, as the Group of 20 meetings fell short of putting North Korea on its agenda ... Such North Korea woes may settle down the fatigued Kospi, which had gone through a nonstop rise.”

Last week, the North Korea risk resurfaced after it launched an intercontinental ballistic missile on Tuesday, resulting in a 0.5 percent weekly drop of the Kospi on Friday and constant weakening of the local currency. Moreover, the European Central Bank‘s meeting minute Thursday hinted at the central bank’s monetary tightening.

Such external woes put a halt on the Kospi‘s bull run that had set the all-time high 12 times since May, backed by anticipations for improvement in corporate governance during President Moon Jae-in’s tenure. The risks had also pushed down the local currency, driving up the exchange rate to above 1,150 won last week, for the first time in nearly four months since mid-March.