The head of South Korea's antitrust watchdog said Monday that he will strengthen the enforcement of fair trade laws by expanding civil actions against rule-breaking companies.

"I will introduce a system that will allow multiple economic players to enforce trade rules at the same time," Fair Trade Commission Chairman Kim Sang-jo said in a conference held in Seoul. "I will make efforts to get trade law violations be resolved through civil suits." 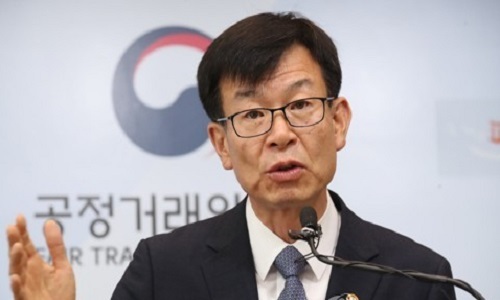 Fair Trade Commission Chairman Kim Sang-jo (Yonhap)
Under the current Fair Trade Act, the FTC is the only entity that can bring a fair trade case to court through the prosecution.

This rule is aimed at preventing a flood of lawsuits being taken against local firms by individuals and civic groups, which would adversely affect normal business activities.

Critics have demanded the government grant rights to lodge a suit against rule-breaking companies by private entities.

The FTC chairman, a former civic activist, earlier said that the abolition of exclusive rights is one of the most effective tools to address the issue of holding companies more accountable.

Also, the State Affairs Planning Advisory Committee, a presidential policy advisory panel set up to design the newly elected Moon Jae-in administration's five-year policy framework, said it will take away the exclusive authority of the FTC to file complaints. (Yonhap)