The Korea Herald has interviewed nine former teachers from the Canadian British Columbia International School in eastern Seoul, which shut down in May after 14 teachers and the dean were deported, and other English immersion institutions currently under investigation. Two former employees from CBIS are taking legal action against the Korea Immigration Service and are fighting their deportation. 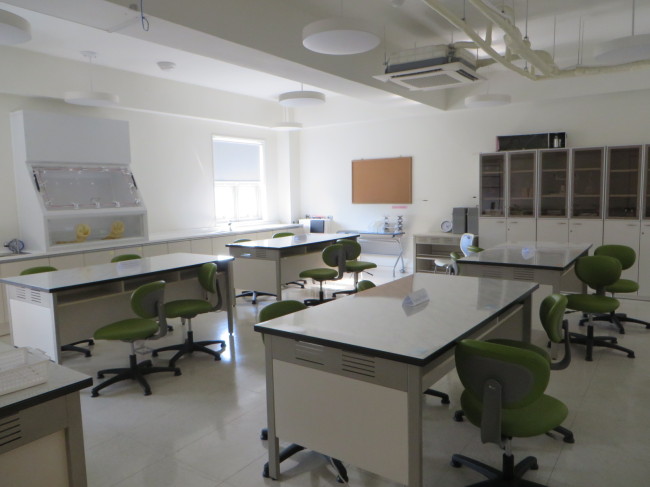 An empty science room at now-disbanded Canadian British Columbia International School in eastern Seoul. (photo credit: Faustus Salvador)
According to their claim, the teachers were wrongly advised to apply for a visa type valid only for language instructors, when they were to teach regular school subjects such as math and science. The immigration service, which should have known this as it reviewed their employment contract, granted the applicants the wrong visa. E-2 visa holders are limited to teaching language conversation classes only.

“The immigration office should nullify the departure order and one-year entry prohibition against our clients as they had rightly obtained the visa to work as teachers,” said Pete J. Rhee from Rhee’s Law Office who represents Robert Flower and Kristen Hendricks.

Employment contracts which the two submitted to immigration for a visa, and which have been seen by The Korea Herald, clearly state details about their teaching duties, including the subjects.

Alex Hebb, another former teacher at CBIS, had his E-2 visa extended by one year after submitting the updated work contract that included his teaching duties. He left South Korea in May, following a departure order.

“It doesn’t make sense that Korean immigration would punish us so harshly. They had all of the information they needed and approved our E-2 visas,” said Hebb.

“They suddenly decided that we shouldn’t be approved. There was no other way to communicate to us that we should switch visas,” he claimed.

Seoul Immigration Office, a branch office in Seoul at the helm of the clampdown, refused to comment on these claims.

It, however, said that the investigation into foreign residents teaching subjects other than their native language on E-2 visas is “still open and ongoing” in a written response.

Speaking on condition of anonymity, an official at Korea Immigration Service explained the review process of E-2 visa applications tends to be loose, as its applicants are thought to be highly educated and less likely to commit crimes.

“The process is supposed to include a thorough review of applicants’ work contracts under which students will be taught,” the source said.

For instance, the now-closed CBIS was an alternative school certified by the Canadian province of British Columbia, but not authorized as a school by the Korean education office. Since it was operating under a hagwon license, it was unable to sponsor E-7 visas for school teachers. There are scores of other global academies, registered as hagwon here but in reality operate as international schools.

Laura Murray, who taught at one such institution in Seoul and is now facing deportation, said teachers are suffering from the errors made by their employers, education offices that allowed them to operate and immigration.
“Although I understand this was practiced by other schools in the past and was viewed as falling under a legal gray area, the reality is it is illegal. The foreign teachers trusted our employers to do their jobs well and assumed everything was legal.

“I blame the education office for issuing the hagwon license without a thorough review,” she said.

No one is offering to take any responsibility for all the damage, from the cost of a flight back home to the impact that the deportation and the one-year re-entry ban would have on her relationship with her Korean boyfriend, she claimed.

An anonymous teacher who taught at Canada Maple International School, which is certified by the Province of Manitoba in Canada to deliver the Manitoba curriculum, said it is in the best interest of future foreign teachers here to “know exactly what kind of visa they are getting and what they are allowed to teach under said visa” before accepting a job offer.

“There are about 22 teachers at CMIS; about half of them are leaving the country. We were lied to at the beginning of our contracts. We were told that CMIS was an international school and that we were accredited as such. It wasn’t until later in my contract that I discovered that we are a hagwon and that some teachers here are working under the wrong visa. Because some of us teach core subjects such as science and history, an E-2 visa is inappropriate for our work,” the teacher said.