[ The Korea Herald – Send E-mail ]
‘2 years as NK hostage bolstered my mission’
Kenneth Bae speaks up on Warmbier’s death, vows to help defectors
By Shin Hyon-hee
Published : Jul 7, 2017 - 22:05
Updated : Jul 7, 2017 - 22:05
Kenneth Bae, 49, was locked up in North Korea for the longest period as a US citizen until then-Director of National Intelligence James Clapper came to his rescue in November 2014.

His appalling two years in the oppressive, isolated state have come to the fore once again in the wake of the tragic death of Otto Warmbier, a 22-year-old American student, shortly after his release from 17 months of detention.

For Bae, Warmbier’s fate felt more brutal and unjust because unlike him, the youngster had probably visited the reclusive regime out of sheer curiosity yet with little knowledge about its notorious practice of using Americans as bargaining chips.

So the missionary and activist, who had retreated from the public eye for a while, opted to emerge back into the world, vowing not to “let his death be in vain.”

“It was heartbreaking thinking about how such a heinous thing has happened. He’s so young and didn’t go there for his faith or religious mission like I did,” Bae said in a recent interview with The Korea Herald at his office in Seoul.

“I’m also concerned about the remaining hostages, and something must be done to get them out as early as possible. What happened is not new -- it’s something the 24 million North Koreans endure every day but now is just being highlighted by the death of one young man.” 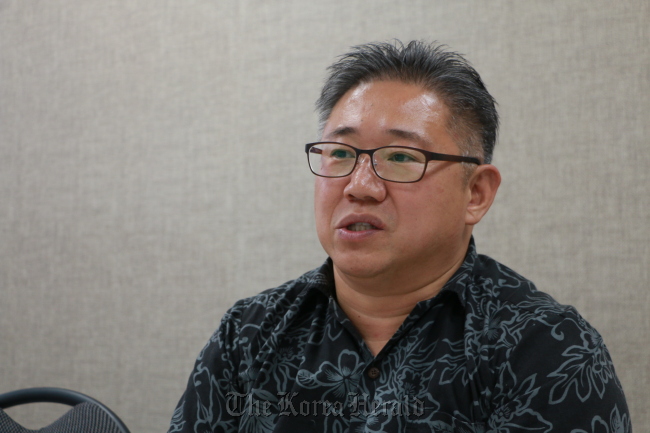 Kenneth Bae speaks during a recent interview with The Korea Herald at his office in Seoul. (Kim So-yeon/The Korea Herald)
Until being captured in November 2012, Bae had run a North Korea tour agency in the Chinese border city of Dandong chiefly for Christian travelers from Western countries.

As he sought to get through customs for his 18th visit with a small group of tourists, North Korean authorities took issue with his external hard drive. Among the files inside were a documentary of a starving young defector digging through garbage waste, and a religious letter that they wrongly believed carried instructions for some kind of military operation.

Bae was taken into custody for intense questioning over charges of “plotting to overthrow the state” for about three weeks and then transferred to a safe house in Pyongyang. In April 2013, he was sentenced to 15 years of hard labor.

The long, drawn-out confinement began to erode his mentality slowly. Sleep deprivation and hard labor were dwarfed by fading hope, with his prosecutor constantly telling him “Nobody remembers you,” from which he drew the title of his 2016 book, “Not Forgotten.”

“I knew I would get out but not when. They were saying almost every week things like, ‘Two years have passed and we have only 13 years to go,’ and ‘You can’t go home. I look forward to your 60th birthday party.’ It was psychological torture,” he said.

“They had probably also threatened Warmbier to extract his confession, not through beating or other forms of physical violence, but as they did to me, saying they would shoot me to death or cut my throat.”

Yet pain, seclusion and the utter absence of freedom could not crush his sense of mission. Rather, while detained, he started to map out his post-release life, reaching the conclusion he would work for the marginalized and voiceless, focusing on North Korean defectors.

“I was denied freedom only for two years but the vast majority of the population wouldn’t even have it for a moment in their lifetimes. So I’d pledged myself not to turn away from the reality or sit on my hands,” Bae said.

“This is the path given by the God for me to take, and I will continue this job in Seoul until the two Koreas are united. And after the unification, I will go to Pyongyang and help the North Koreans, so right now I’m getting myself ready here for that.”

At Serving Life, Bae focuses on three priorities: linking defector hopefuls with specialists to help them out of the country; helping the new arrivals with trauma therapy, employment and English studies; and “rebuilding” their lives as South Korean citizens fully incorporated in society.

With English language being one of defectors’ biggest challenges here, the organization plans to run an event called “English Unification Camp” from Aug. 7-12, under which they will receive one-on-one tutoring and mentoring.

Among the reasons he left the tourism business is his belief that foreign nationals, especially US citizens, should not travel to the communist state, given the risks of being locked up there and used as a political card.

Calls are growing in Washington for a tour ban, with a bipartisan bill proposed at Congress. Robert King, special envoy for North Korea human rights at the US State Department, raised the need for a “differential” ban that exempts medical and other humanitarian visits during an interview with Voice of America released Friday.

“It is not right to go there until the North Korean government takes steps to ensure that all foreigners would be safe and not be detained for unreasonable purposes,” Bae said.

He was also adamant that humanitarian assistance and exchanges should take place, saying it is “worth taking a risk” because it enables the two Koreas to restore trust in a way that a state cannot. President Moon Jae-in’s plan to restart relief aid is an upbeat sign, unless it involves cash or other components that may be siphoned off for military uses, he said.

On the human rights front, however, he called for Moon to raise his voice, instead of “keeping a sensitive issue underground.”

The issue put the liberal president in the hot seat during the election campaign after former Foreign Minister Song Min-soon in his newly published memoir that Moon, then the presidential chief of staff, instructed intelligence officials to seek Pyongyang’s opinion before abstaining from a 2007 UN Human Rights Council vote on a resolution.

“The president should be able to demand the whereabouts of South Korean hostages be verified and they be returned as soon as possible. It’s implausible the government doesn’t even know whether they are alive or not,” Bae said.

In its path to an eventual unification, South Korea may make preparations without the help of its headstrong northern counterpart.

With most rank-and-file North Koreans cut off from the outside world, such programs as loudspeaker broadcasts and anti-North Korea leaflets play a key role in awakening them and driving more escapes, he said, referring to defector testimonies.

The government, for its part, needs to expand its resettlement program for newly arrived defectors who could easily fall prey to fraud, trafficking, prostitution and other illicit schemes. More than 300 defectors have been jailed, Bae noted.

Nearly 30,500 North Koreans have resettled in the South as of March 2017, some 70 percent of them young women, Unification Ministry data shows.

“The constant influx of information is most urgent, so we should mobilize all available channels,” he said, adding Serving Life plans to launch a radio show where defectors would read the Bible and tell stories.

“There’s a saying that for a defector, the first person she meets after leaving the Hanawon resettlement center is the most important one for her life. They need greater public attention, care and time until taking root here. We should bear patience and give them a chance.”