[ The Korea Herald – Send E-mail ]
Mother files complaint against McDonald’s after daughter diagnosed with ‘hamburger disease’
By Jo He-rim
Published : Jul 5, 2017 - 18:06
Updated : Jul 6, 2017 - 11:24
A mother on Wednesday filed a complaint against McDonald's Korea, claiming her daughter was diagnosed with the “hamburger disease” after eating a burger with an undercooked patty in one of its outlets.

“The 4-year-old victim had no health problems, but caught hemolytic uremic syndrome after eating a McDonald’s hamburger,” lawyer Hwang Da-yeon said at a press conference held in front of the Seoul District Prosecutors Office, before submitting the complaint. 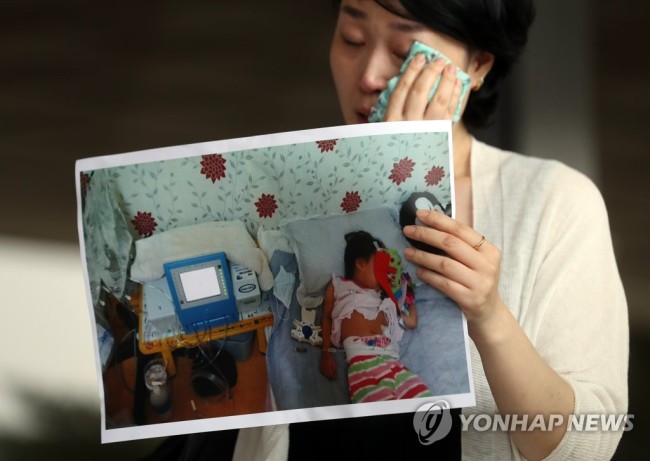 Plaintiff Choi Eun-ju holds a picture of her daughter in front of Seoul District Prosecutors Office on Wednesday. (Yonhap)
“McDonald’s has been aware of the risk of undercooked meat. But it failed to properly cook the patty, nor did it provide any notification in advance of such a possibility when selling the Happy Meal children’s option,” she said.

The plaintiff also made a tearful plea at the press conference, asking state prosecutors to investigate and hold McDonald’s Korea responsible for her daughter, who has suffered irreversible damage to her kidneys and must undergo eight to 10 hours of peritoneal dialysis on a daily basis.

“I cannot turn back time and I can only wish for (my daughter) to get better,” she said.

According to the mother, the child ate a hamburger at a McDonald’s outlet in Gyeonggi Province in September and fell ill about three hours afterwards.

She was brought to an intensive care unit three days later, where she was diagnosed with HUS, a food-borne disease that can cause acute kidney failure. The child was discharged from the hospital two months later, but had lost 90 percent of her kidney function.

The McDonald’s outlet denied any link between its product and the child’s illness, saying the meat is machine-cooked, eliminating human error.

The lawyer called on the prosecutors to seize the CCTV footage of the kitchen on the day as evidence.

The disease is called the “hamburger disease” as it is often caused by bacteria in contaminated ground meat, and usually develops in children. The symptoms of the disease include bloody diarrhea, abdominal pain and vomiting.