[ The Korea Herald – Send E-mail ]
Foreign investors bought up Asian stocks amid US rate hikes: data
By Paige Shin
Published : Jul 5, 2017 - 15:54
Updated : Jul 5, 2017 - 15:58
Foreign investors bought shares traded on the South Korean and Asian stock markets in the first half of this year despite concerns over capital flight as the US marked up its interest rates, industry data showed Wednesday.

Foreign investors purchased $29.1 billion worth of stocks more than they sold in Asian countries, up compared to $27.6 billion for all of last year, according to statistics by the Korea Center for International Finance. 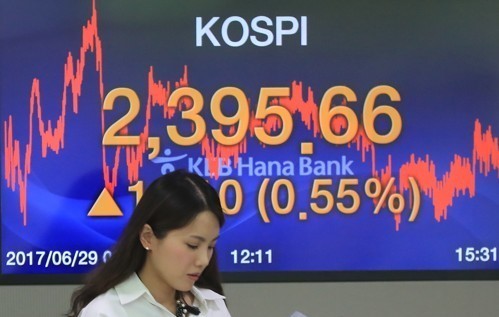 Foreigners sold $4.1 billion of stocks in the Asian markets.

South Korea and Taiwan were the most popular among foreign investors with the net purchase of $9 billion each, followed by India at $8.5 billion. Foreign investors also bought $1.3 billion worth of Indonesian shares with numbers for the Philippines, Thailand and Vietnam standing at around $400 million each.

In June alone, when the US Fed raised key interest rates by 0.25 percentage point to 1-1.25 percent, foreigners net bought $1.7 billion worth of South Korean stocks, $700 million Taiwanese stocks and $600 million of Indian shares.

The KCIF said the US rate hikes had little impact on the Asian financial market.

Stock prices in 49 major markets have risen 7.8 percent on average for the first six months this year, up from 6.7 percent surge for the whole previous year, the KCIF said.

Stock prices hit all-time highs in 14 out of the total 49 stock markets across the world.

Argentina, Greece and Turkey witnessed a whopping 28 to 29 percent increase in stock prices during the first six months of this year, followed by South Korea at 18.9 percent and India at 16.1 percent.

The US marked an 8.2-percent increase, Germany a 7.4-percent rise and Portugal a 12-percent surge, data showed. (Yonhap)