One of them is talking to a solider from the Chinese Army, while the rest are staring at the ground.

The SNU Human Rights Center, which has been searching for evidence on the Japanese wartime sexual enslavement, said the footage was filmed in 1944 in front of a private house used as a “comfort station” in Songshan, Yunnan Province, China. The women in the photo are the so-called “comfort women,” it claimed.

“Their appearance, such as the bare feet, suggest they were enslaved,” said SungKongHoe University professor Kang Sung-hyun, who participated in the study, in a press conference in Seoul.

There have been numerous photos and documented testimonies of surviving victims of the sexual slavery, but this is the first discovery of a moving image, the center said.

The women and the place captured in the clip match those shown in a set of photos released in 2000, he said. In the photos, four women are standing in front of a bunker with a Chinese guard after they were captured by the allied forces. In other photos, women are seen being interrogated or receiving medical treatments.

It is highly likely that Sergeant Edwards C. Fay, a photographer from the allied forces, had taken the photo as well as the video, researchers said. 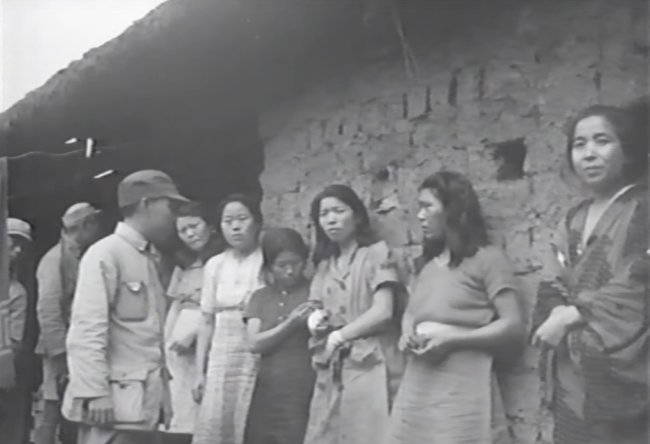 Screen capture of a video released by the Seoul National University Human Rights Centers shows former Korean sex slaves in Songshan, China, who are believed to have been coerced into sex slavery during the war in which Korea was under colonial rule by Japan. (The Seoul National University Human Rights Center)
Kang explained that a dozen wartime sex slaves were captured in Songshan by the allied forces in September 1944, as the Asia-Pacific War was nearing the end with Japan’s surrender in 1945. Captives were released and sent back to Korea in 1946.

Former sex slave Park Young-shim, who died in 2006, confirmed in 2000 that the pregnant women in the pictures is her.

Researchers said that it is highly probable that the names of the women who appeared in the video are on the list of the former Korean sex slaves who were interrogated as captives in China.

Park’s name also appeared in a 1944 Chinese document detailing the interrogation of captives from the Songshan area.

The research team discovered the video from some hundreds of film reels stored at the National Archives and Records Administration in the US. The video had been kept there for 70 years.

“Due to a long-standing dispute over Japan’s wartime sexual slavery, it became crucial to come up with evidence. This video clip will strengthen the admissibility of evidence behind wartime sex slavery,” said professor Kang.

As of July 2017, 38 former wartime sex slaves are alive, according to the government data.

Up to 200,000 women, many from Korea, then a colony of Japan, are believed to have been coerced into sex slavery during the war.