“The president, along with other officials, will hold a meeting to discuss the government‘s fiscal policies and strategies over the next five years sometime mid-July,” said the finance minister, during a policy meeting in Seoul with ministry officials, including the minister of land, infrastructure, transport and tourism and the minister of the Fair Trade Commission.

The new economic road map is said to include the government’s agenda on taxation reforms as well as general public finance policies. Kim announced that the new tax reform bill is slated to be released sometime early August. The tax policy revision is intended to secure capital in order help fund President Moon’s pledge to create 810,000 new jobs in the five years of his presidency. 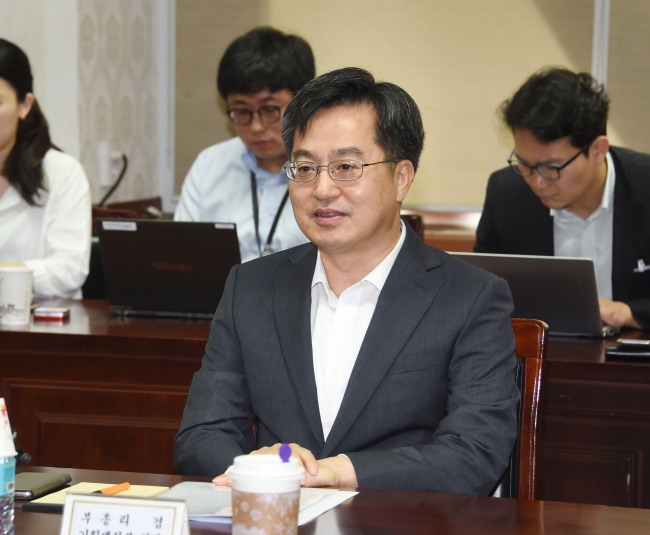 Finance Minister Kim Dong-yeon speaks at policy meeting in Seoul with ministry officials on Tuesday. (Ministry of Strategy and Finance)
Kim emphasized that all of the ministries’ fiscal policy measures, including tax reform, are in the name of creating new jobs.

“Job creation is the most pressing issue in the country,” said Kim. “We will emphasize our policy priorities on creating jobs.”

“Timing is everything when it comes to implementing a supplementary budget,” he added. “I will request government ministries to be prepared to execute the proposed budget as soon as possible once the National Assembly approves the bill.”

The government submitted a fiscal stimulus package request of 11.2 trillion won ($9.74 billion) to the National Assembly early last month in a move to tackle the country’s rising unemployment rate and to help boost sluggish economic growth. Parliament, however, has yet to approve the bill amid strong clashes by the main opposition party who argue the supplementary budget will result in a huge fiscal burden to future generations.

Choi Jong-ku, CEO of the Export-Import Bank of Korea, held a press conference Monday where he also confirmed job financing as the agency’s core priority.

According to Choi, household debt should be resolved by income-led growth, a stance in line with President Moon’s fiscal proposals to tackle debt.

“I will put serious thought into how financing will contribute to job creation, how to combat household debt issues, provide support for the disadvantaged and how to make corporate restructuring more effective,” he said.

“If we can make financial policies that allow funds to flow to a more productive place, we can contribute to job creation,” Choi added regarding unemployment. “In order to pay off debt, income must be maintained or improved.”