The low-cost carrier has allocated a 189-seat B737-800 jet to serve the Gwangju-Jeju route two times a day, the airline said in a statement. 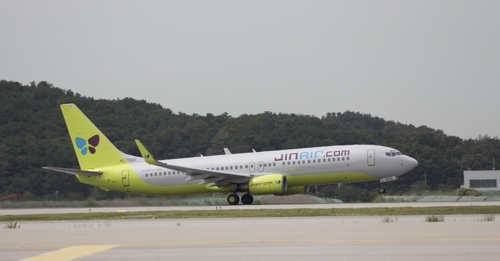 A Jin Air B737-800 passenger jet takes off from a runway in this undated photo. (Photo courtesy of Jin Air)
It currently operates three flights between the resort island and three domestic destinations -- Gimpo near Seoul, the southern port city of Busan and Cheongju in North Chungcheong Province.

As of May 29, the number of passengers served by the budget carrier unit of Korean Air Lines Co. exceeded 30 million nearly nine years after it started operating.

Jin Air, launched in July 2008, became the second low-cost carrier to reach the milestone after Jeju Air Co., which reported the achievement in January 2016. (Yonhap)