More than 250 medical doctors and health care providers from South Korea and the United States gathered in Seoul on Friday to discuss ways to pursue innovations as the economies around the world embrace the fourth industrial revolution.

The annul Healthcare Innovation Seminar, hosted by the American Chamber of Commerce in Korea, brought together leading experts from government, academia and industries as the world undergoes rapid changes. 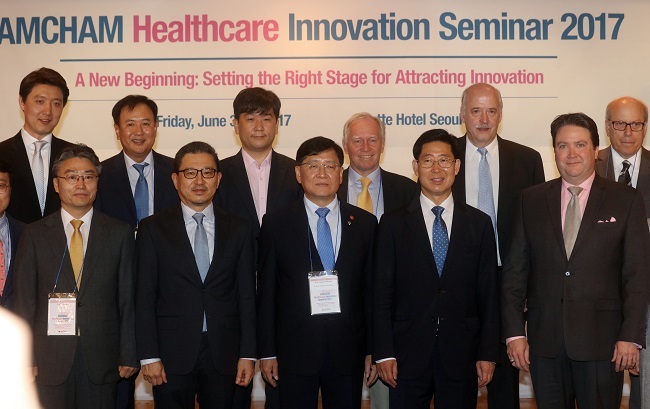 (Yonhap)
"Innovation is critical in every aspect," said Stephen Lockhart, vice president of Pfizer, during a keynote speech, adding that robust R&D in various health care sectors, including immunology and oncology, are essential for future growth.

The seminar featured presentations and panel discussions on topics, such as challenges to pharmaceutical R&D amid the fourth industrial revolution that is characterized by a fusion of cutting-edge technologies and the blurring of lines between the digital and biological spheres.

Noticeably, IBM Inc. has spearheaded the global AI market with its AI-based supercomputer called Watson that can diagnose and treat cancer, one of the leading causes of death for humans. Watson for Oncology is designed to assist doctors in making more informed treatment decisions by analyzing a patient's medical information against a vast array of data and expertise to provide evidence-based treatment options.

Last year, Gachon University Gil Medical Center employed Watson for the first time in the world to assist doctors in diagnosing cancer. Currently, five major hospitals in the country use the system to combat cancer.

"Most of the doctors initially showed negative views on Watson, openly wondering how robots could diagnose cancer in humans," Lee said. "However, the system now helps patients greatly as Watson can provide treatment options in as little as eight or 10 seconds."

Since doctors are struggling to keep up with the large volume of research and medical records that are produced day after day, Watson is effective at analyzing the meaning and context of data, Lee said. (Yonhap)