President Moon Jae-in's approval rating slightly increased due in part to his efforts to enhance communication with citizens, a survey indicated Friday.

In the survey conducted from Tuesday through Thursday by local pollster Gallup Korea, Moon's rating was tallied at 80 percent, up 1 percentage point from a week earlier.

Those who disapproved of his job performance made up 13 percent, down one percentage point from the previous week, while 7 percent said they were unsure or refused to answer. 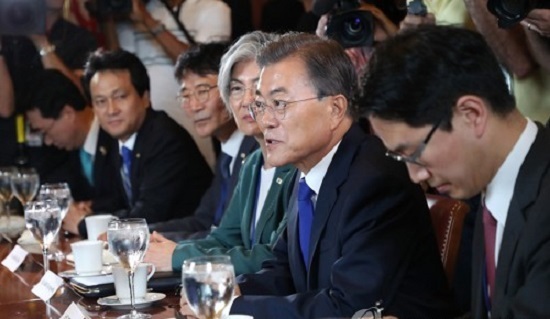 President Moon Jae-in (second from right) speaks during a meeting with US lawmakers in Washington DC on June 29, 2017. (Yonhap)
On Monday, the government began allowing citizens and foreign tourists to drive or walk near the presidential office Cheong Wa Dae at all hours as part of Moon's efforts to reach out to citizens and shake off the erstwhile aloof -- or high-handed -- image of a president.

The only road leading to Cheong Wa Dae had been closed off from 8 p.m. to 5:30 a.m. for decades. The late night curfew had been in place since 1968, when North Korean commandos infiltrated Seoul to assassinate then South Korean leader Park Chung-hee.

The ratings for the Bareun Party and Justice Party were tallied at 9 percent and 7 percent, respectively.

The People's Party garnered 5 percent, its lowest point since its launch early last year. The party was thrust into a crisis after its member was accused this week of manipulating election-season allegations against Moon's son.

The survey was conducted on 1,005 adults across the country and had a margin of error of 3.1 percentage points, with a 95 percent confidence level. (Yonhap)