[ The Korea Herald – Send E-mail ]
Moon made 'good strides' toward US away from N. Korea: Haley
By a2017001
Published : Jun 30, 2017 - 09:30
Updated : Jun 30, 2017 - 09:30
WASHINGTON -- President Moon Jae-in has made "good strides" towards the United States and away from North Korea, and the communist nation is pushing the South Korean leader further away from it with a series of missile tests, US Ambassador to the UN Nikki Haley said.

Haley made the remark during a House Foreign Affairs Committee hearing as she talked about the deployment of the US THAAD missile defense system in South Korea, which Moon has suspended pending an environmental assessment. 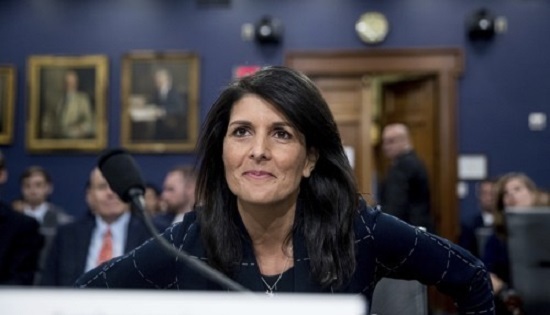 US Ambassador to the UN Nikki Haley (Yonhap)
"He has actually made good strides towards us and away from North Korea on many levels and, you know, those missiles that continue to be tested continue to push him the other way. I do think he was trying to slow-walk THAAD to see where it was going to be," Haley said.

Two of six THAAD launchers were already installed, but Moon halted the deployment of the remaining four launchers pending an environmental review. His office has rejected speculation the halt might be a precursor to reversing the decision on THAAD deployment altogether.

Haley warned that President Donald Trump will take action if the deployment is reversed.

"At the end of the day, I personally believe it's going to work itself out. But I also know that the administration, the second we see something that's not going in the favor of protection of our troops, then I know the president will act," she said without elaborating.

As to how to deal with the North, Haley said the more pressure the better.

"You are dealing with a paranoid leader who thinks that we are trying to assassinate him, who thinks we are trying to do regime change, who keeps his public in the dark, only hearing what he wants them to hear. And what we need to remember is that he is building a nuclear program," the envoy said.

"You are more optimistic saying it is multiple years before an ICBM comes forward. I think it's going to happen sooner, because they are on target to do that. And they continue to use their people for those violations. So I would welcome any sort of pressure that you could put forward to slow down that process of nuclear development," she said. (Yonhap)