T'way Air Co., a South Korean low-cost carrier, said Thursday it will start services on profitable international routes to the United States and Europe in 2020.

To serve on the long-haul routes, the country's fifth-biggest budget carrier by sales plans to purchase or lease 10 large passenger jets by 2025 from Airbus or Boeing to strengthen its fleet, T'way Air Co. CEO Jeong Hong-geun said in a press conference. 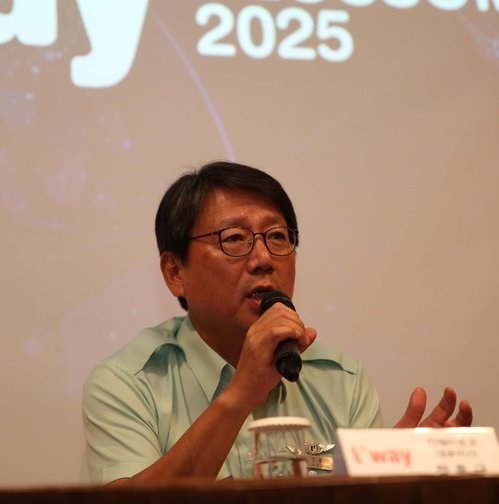 T`way Air Co. CEO Jeong Hong-geun answers questions on the budget carrier`s business plans in a press conference held at the Plaza Hotel in Seoul on June 29, 2017. (Yonhap)
"The country's six budget carriers are competing with each other mainly in Asian markets. While seeking a share in the short-haul Asian route markets, we will explore new low-cost travel demand in the mid- and long-range route markets for sustainable growth," Jeong said.

He cited the US and Frankfurt in Germany as initial long-range service route destinations and then London, Paris and Rome in Europe as the next targets.

In a major move to raise funds for the planned fleet expansion, T'way Air will list its shares on the tech-heavy KOSDAQ market next year, the CEO said without elaborating.

"By 2025, we are targeting to deliver 20 million passengers a year and post 2 trillion won in sales," the CEO said.

T'way Holdings Inc. owns an 81 percent stake in the budget carrier, followed by the publishing company YeaRimDang with a 12 percent stake and the remainder held by others.

In 2016, the country's six budget carriers, including Jin Air, Jeju Air, Air Busan Co., Air Seoul Inc. and Eastar Jet, transported 56.8 percent of the passengers on domestic routes and 19.6 percent of passengers traveling abroad. The figures were up from 54.6 percent and 14.6 percent, respectively, from a year earlier, according to the transport ministry.