[ The Korea Herald – Send E-mail ]
Hanwha chairman at vanguard of Korea’s business ties with US
By Son Ji-hyoung
Published : Jun 28, 2017 - 16:12
Updated : Jun 28, 2017 - 18:16
Hanwha Group Chairman Kim Seung-youn has been at the vanguard of fostering business cooperation with the United States, years before uncertainties emerged upon the inauguration of US President Donald Trump, who has expressed skepticism toward the two countries’ free trade agreement.

Kim’s ties with leading business figures in the US, including Heritage Foundation President Edwin Feulner, has made him one of the rare South Korean business representatives who is able to bridge the differences between the two new administrations and seek mutual benefits. 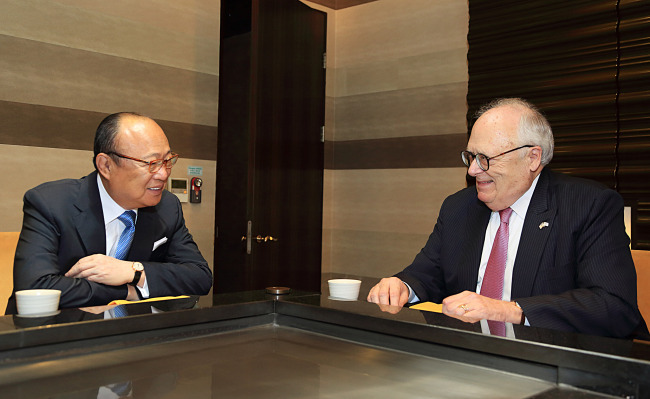 Feulner was appointed as chair of Trump’s transition team in August last year.

A week after Feulner returned to the chief position of the Washington-based conservative think tank in May, he visited South Korea and met with Kim to discuss ways to cope with uncertainties surrounding the Korea-US FTA.

Kim’s meeting with Feulner had garnered attention in Korea as it coincided with the nation’s presidential election on May 9 after months of political turmoil. Kim was also invited to Trump’s inauguration ceremony in January at the recommendation of Feulner.

Feulner and the Heritage Foundation, which he co-founded in 1973, have reportedly played a crucial role in crafting Trump’s right-wing agenda, including Trump’s recent decision to withdraw from the Paris climate deal, which Feulner called a “commonsense approach” for Americans.

In March, Kim also met with General Electric Chairman Jeffrey Immelt in Seoul to exchange views on the growth engines of both companies and seek cooperation in the aero engine and gas turbine sector. 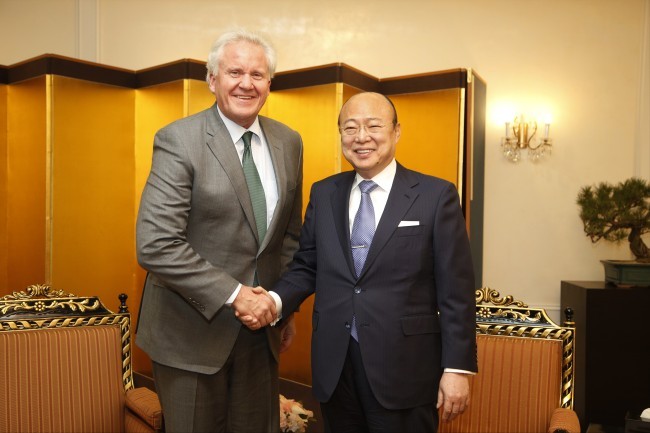 General Electric Chairman Jeffrey Immelt (left) and Hanwha Group Chairman Kim Seung-youn shake hands at Hanwha’s headquarters in Jung-gu, Seoul, March 13. (Hanwha Group)
Following these talks, Shin Hyun-woo, chief executive of the aviation and defense division of Hanwha Techwin, has joined the trade mission to the US by accompanying President Moon Jae-in on his five-day trip to the US for a summit this week. The group’s defense arm has maintained business partnership with GE Aviation for over three decades, which gave rise to homegrown fighter jets such as the F-5, F-15K, T-50 and Surion.