For a decade, the 62-year-old who long worked as a psychic in the northeastern region of Catalonia where Dali was born, has tried to prove she is the painter’s child.

Her paternity claim, however, has raised skepticism, with Dali biographer Ian Gibson writing in El Pais that he had doubts, saying the artist preferred watching rather than having sex. 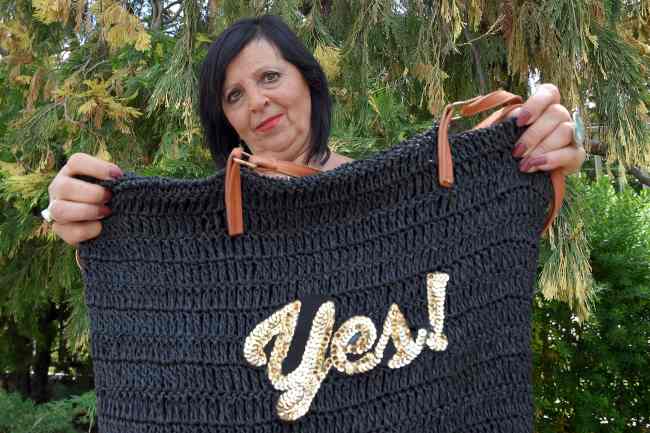 Spanish national Pilar Abel Martinez, 61, who claimed to Salvador Dali’s daughter, poses with a bag reading “Yes” during an interview in Barcelona on Monday. (AFP-Yonhap)
But Abel is adamant her mother had a relationship with Dali, one of the most celebrated and prolific painters of the 20th century, when she worked for his friends in Port Lligat, a tiny fishing hamlet.

The painter lived and worked there for years.

Abel told AFP a judge’s decision Monday to exhume Dali’s remains was “a big victory” though she acknowledged there was still a long way to go.

The Dali Foundation which manages the artist’s estate has said it will appeal.

“At last I would know who I really am and would be recognized,” she said.

“I don’t want his heritage, if it comes so be it, but it’s the last thing I want. First of all I want my identity.”

She said her grandmother first told her she was Dali’s daughter when she was 7 or 8 years old, and her mother admitted it much later.

Abel is from the city of Figueras like Dali, and she said she would see him in the streets often.

“We wouldn’t say anything, we would just look at each other. But a glance is worth a thousand words,” she said.

Notoriously eccentric, Dali’s life was marked as much by the genius of his work than by his own extravagances.

A question mark has always hung over his sexuality.

Writing in El Pais, Gibson said he had once spoken to a gay Colombian gallery owner called Carlos Lozano who knew Dali well and told him the painter was homosexual but incapable of acting on it.

He also said Dali could not stand anyone touching him, bar his muse and longtime partner Gala.

But according to Abel’s lawyer Enrique Blanquez, the affair was “known in the village, there are people who have testified before a notary.” (AFP)