This came after oil prices spiraled to a record-low the previous week and the Bank of Korea Gov. Lee Ju-yeol picked the latest fluctuation on the oil price as one of the “external downside risks” in carrying out its monetary policy.

“The prolonged crude slump has dampened the expectations for the inflation and normalization of monetary policies at home and abroad,” Lee Sur-bee, a fixed income strategist at Samsung Securities wrote in a report, citing crude drops for the past five consecutive weeks up to last week.

“The drop will lead to downward adjustment of the price prediction and dent the export-oriented growth momentum of South Korea, which may leave the BOK with little case for the interest rate hike slated next year.”

Kim Hyoung-ryoul, a strategist at Kyobo Securities, wrote that the slump would sap consumer sentiment.

“The global consumer sentiment is likely to increasingly weaken, if the trend of declining crude oil prices lingers,” he wrote. 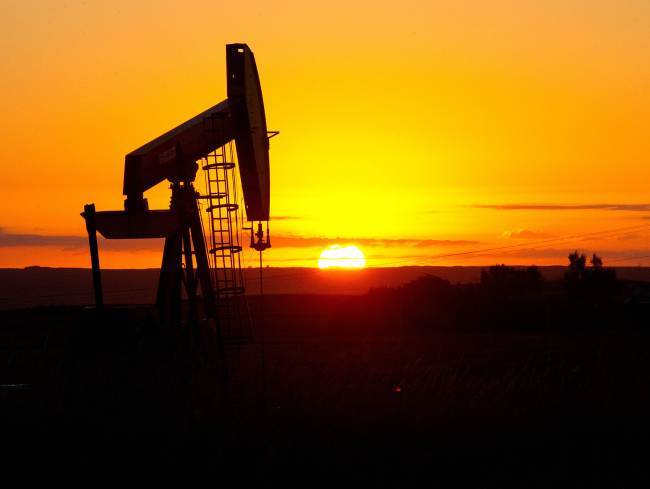 (AFP-Yonhap)
The BOK Gov. Lee said Thursday he would watch the ups and downs of the oil price, which might affect the exports data, until a new set of monetary policies is unveiled in July.

The operating profits of main bourse-listed refiners, SK Innovation and S-Oil, are expected to drop 26.6 percent and 40.8 percent on-year in the second quarter this year, according to a market tracker FnGuide on Monday.

The refiners’ stocks contrasted with the record run of the local stock markets Monday.

Hong Chun-uk, a strategist at Kiwoom Securities, attributed the sluggish growth in stock markets in June until Friday to the ongoing oil drop, citing a slower rise in the Kospi then by 1.4 percent than that of May by 6.1 percent. “The oil slump appears to have shed light on concerns about South Korean businesses‘ growth forecast,” Hong wrote in a Monday report.

The benchmark crude oil prices continued to finish lower for five consecutive weeks, mainly due to supply glut on US shale production that had dwarfed the supply cut by the Organization of the Petroleum Exporting Countries and Russia.

On Wednesday, US West Texas Intermediate had dived to a ten-month low, hitting $42.05 a barrel. London Brent oil meanwhile hit $44.35, the lowest since November 2016.

Also last Tuesday, US West Texas Intermediate entered a bear market, by falling down more than 20 percent from its recent high in February.