The looming investors’ capital exodus of up to 4.3 trillion won ($3.76 billion) and reduction of their proportion in the emerging markets index by between 0.23 percent and 15.27 percent “will put little pressure on the stock markets in Korea,” FSC Vice Chairman Jeong Eun-bo said.

The policymaker of the state-run financial oversight body said a continuing “great rotation” -- referring to investors’ shift in focus from developed markets to emerging ones -- as well as the influx of offshore investors will outsize the anticipated cash flight. 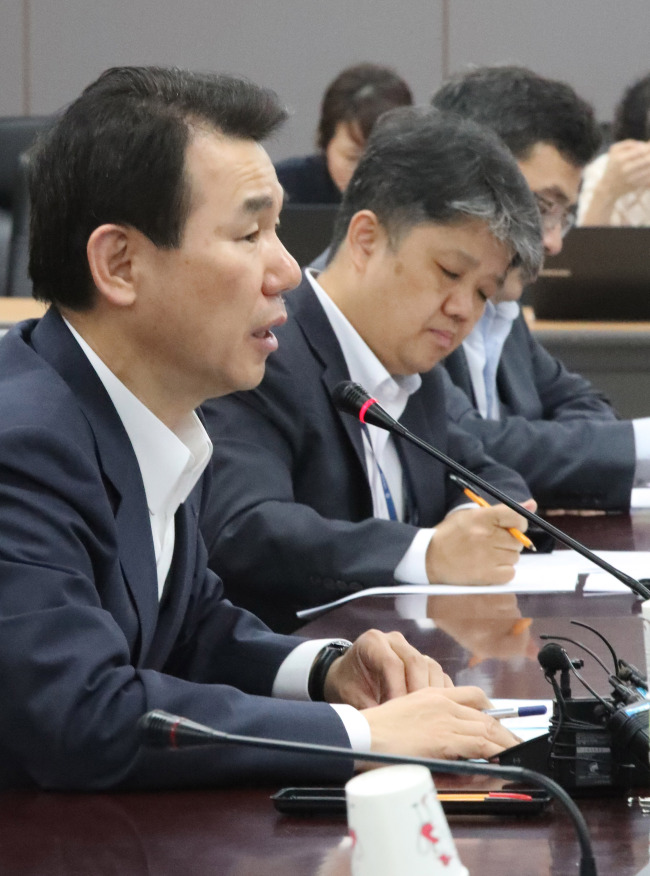 Financial Services Commission Vice Chairman Jeong Eun-bo speaks at a policy meeting on how to cope with the MSCI’s inclusion of 222 China A Large Cap shares to the benchmark emerging markets index Wednesday. (Yonhap)
Equity experts, in sync with the policymaker, maintained optimism on the local stock market.

Lee Eun-taek, a strategist at KB Securities, also said the Korean financial market would remain unscathed by the MSCI decision, as the emerging markets are expected to buoy as a whole.

The 222 domestic A-shares of China were included in the benchmark index by the New York-based global equity index compiler Tuesday, after three failed attempts. The stocks, from markets in Shanghai and Shenzhen, are expected to add 0.73 percent of the weight of the index through a phased process in May 2018 and August 2018.

On Wednesday, the MSCI’s decision pushed down South Korea’s stock market indexes. The benchmark Korea Composite Stock Price Index and the Korean Securities Dealers Automated Quotations both tumbled by nearly 1 percent from Tuesday in early morning trade at around 9:30 a.m. The markets pared losses by half from the late morning trade by the time they closed.

The decline, however, would be “transient,” though the MSCI’s decision is clearly “unfavorable” to Korean markets, Ko Seung-hee, a strategist at Mirae Asset Daewoo, wrote in a report.

For example, the Korean stock market was rattled after offshore selling of 9.3 trillion won of stocks in the first half of 2013, in line with Vanguard Group’s decision to switch the benchmark of its emerging market index fund. The market, however, soon picked up after winning appeals on lowered prices in the second half, Ko wrote.

“The anticipated widening market fluctuation of the Korean stock market, triggered by the MSCI’s decision, will draw more attention of buyers thanks to lower prices, as the robust ground is likely to continue,” Ko wrote Wednesday.

Meanwhile, the FSC downplayed the possibility of South Korea’s inclusion into developed markets in the Wednesday meeting, as it saw offshore trade of local currency, a prerequisite for the inclusion, as an unlikely option.