South Korea’s SK hynix is part of the group and set to provide loans worth 3 trillion won ($2.62 billion), covering around 15 percent of the buyout price. SK hynix’s participation in the sale is expected to raise the possibility of the company forging an exclusive partnership with Toshiba, the world’s second-largest memory chipmaker amid the booming chip business driven by growing demand for smartphones.

The consortium is led by the US private equity firm Bain Capital, the state-backed fund Innovation Network of Japan and the government’s Development Bank of Japan.

Toshiba also said it would seek to reach a definitive agreement with the consortium before its annual general meeting of shareholders on June 28. The Japanese firm hopes to complete the deal before March, after clearing required processes including competition law approvals in key jurisdictions.

The statement, however, did not mention SK hynix, as the Korean chipmaker joined the consortium by providing loans only worth 3 trillion won. 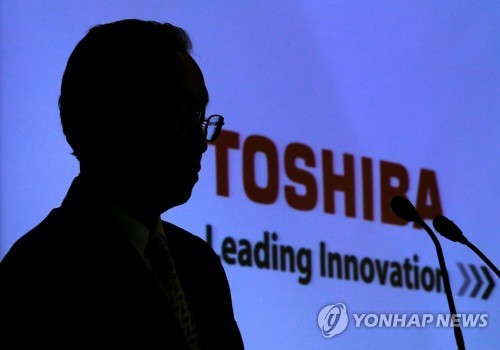 Local analysts are optimistic about SK hynix joining the sale due to the rosy outlook of the global NAND flash market.

“Toshiba’s pick will be positive to SK hynix as the Korean chipmaker will see a rising market share equivalent to its 15 percent stake in the continued favorable NAND flash market,” said Song Myung-seob, an analyst from HI Investment & Securities.

The global NAND flash market will rise 6.1 percent on average annually by 2020 on rising demand and short supply, according to market research firm IHS Markit.

“SK Group has been successful in merging and acquiring chip-related businesses including SK hynix, SK Materials and LG Siltron. Based on the past decision-making outcome, it is natural that we have expectations on its fourth M&A project,” said Kim Kyung-min, an analyst from Daishin Securities.

Meanwhile, SK hynix officials said they did not have any official comment.

But market insiders viewed that SK hynix’s strategy of keeping a low-profile in the bid, instead of jumping into the race by leading a separate consortium, was a realistic choice. It did not have that much money in the first place and an aggressive scenario could have sparked a hostile reaction from the Japanese public, some analysts said. Joining the bid in the form of providing loans can avoid antitrust hurdles, they added.

Following the news reports, the share price of SK hynix rose by 1.25 percent to 64,800 won from the previous day, setting a new daily record.

The deal appears to be promising to SK hynix, but Samsung Electronics, will continue to retain its position in the NAND market, according to experts.

The combined share of the two firms -- which will stand at 28.6 percent -- will still fall short of unseating Samsung Electronics from the top position.

Toshiba’s chip business sale came as the firm needs to sell its lucrative chip unit to cover billions of dollars of losses from its US nuclear unit.