Kori-1, the nation’s first atomic plant opened in 1978, has come to a halt at midnight Sunday, following the Nuclear Safety and Security Commission’s decision on June 9 not to extend its operation. 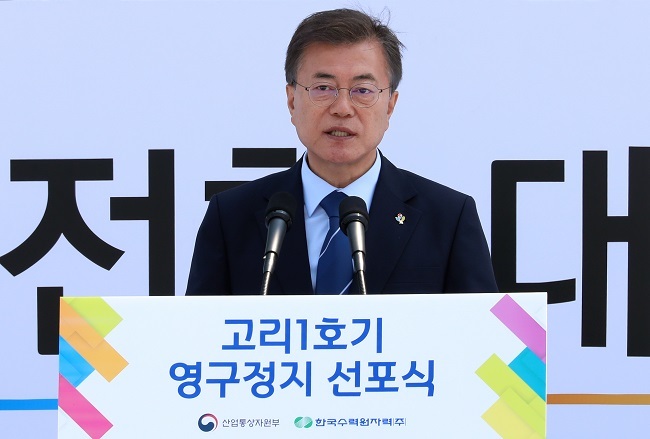 President Moon Jae-in delivers a speech in a ceremony marking the permanent shutdown of South Korea`s first nuclear reactor Kori-1 in Busan, 450 kilometers south of Seoul, on June 19, 2017. (Yonhap)
Moon said the closure of Kori-1, which played a pivotal role in responding to ever-increasing electricity demands during the fast industrial development era in the 1970s and ‘80s, heralds a fundamental shift in South Korea’s energy policy.

“So far, our country’s energy policy has been focused on low price and efficiency only, thus neglecting the safety of the people or the sustainability of the natural environment,” he said.

Though nuclear energy was an inevitable choice for a country heavily reliant on energy imports, it is now time to move on to a clean energy paradigm, the president said.

A detailed roadmap is yet to be unveiled, but Moon has said last week that the government aims to generate 20 percent of power from clean and renewable sources by 2030, from today’s roughly 5 percent.

Referring to the nuclear meltdown in Japan’s Fukushima in 2011 and the recent set of earthquakes on the Korean Peninsula, Moon warned the audience against the irreversible damages resulting from nuclear accidents.

“The new government shall consider the nuclear safety issue as a national security agenda,” he said, pledging to promote the NSSC as a presidential body and to reinforce its independence and authority.

The president also said that he would review the country’s nuclear policy altogether, seeking to call off the construction plans for new reactors and to gradually cease operation of outdated facilities.

“Under any circumstances, the government will make it a strict rule to notify the people of anything which may be related to their life and safety,” Moon said.