The price of jeonse -- referring to deposits for a two-year lease of a house instead of monthly payments -- also rose sixfold compared to income over the cited four years.

A separate set of data from Kookmin Bank, meanwhile, showed the average price of apartments nationwide surging 22 percent, from 260.8 million won on average in December 2012 to 318 million won in December 2016. The rate of increase was 2.6 times faster than the income increase. 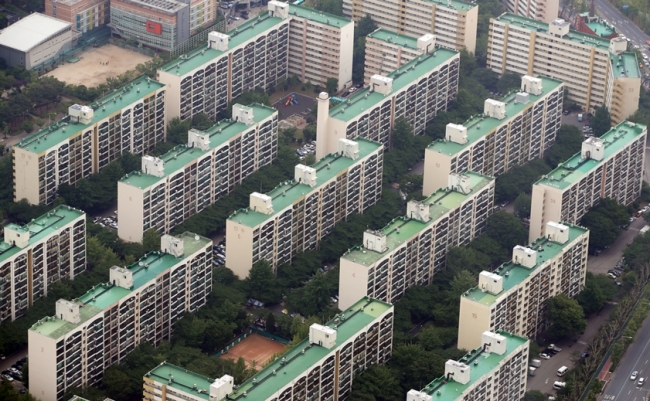 (Yonhap)
The data also indicated that the average apartment price in December 2016 was 6.2 times higher than the annual household income on average across the nation, meaning that it might take more than six years to buy an apartment in South Korea if all income is saved.

In Seoul, the average apartment price was 11.6 times higher than average annual income, meaning that it would take nearly 12 years for a salaried worker to cover the cost of an apartment in Seoul.

However, the current household income grew far slower. In 2014, the monthly household income rose 3.2 percent on-year, while the yearly increase rate of income in 2015 and 2016 from a year before stood at 1.6 percent and 1.1 percent, respectively.

The former finance minister, in the second year of former President Park Geun-hye’s tenure, raised the loan-to-value ratio and debt-to-income ratio, indicators for maximum volume of mortgage loans, by 10-20 percent. The move aimed to invigorate the domestic economy but led to more home transactions and the following housing price hike. The move in hindsight fell short of increasing household income and is now blamed for snowballing household debt.