For the past 11 years, South Korea has recorded the highest suicide rate among the Organization for Economic Cooperation and Development countries, with depression and mental illnesses behind most of the self-inflicted deaths.

Despite the growing number of people suffering from chronic mental health problems, many South Koreans are still reluctant to receive in-hospital treatment due to social stigmas. But one tech startup has set out to address the issue with a new and innovative medical device that could possibly treat mental diseases at home.

Local startup Ybrain has created a headband that sends weak electric currents to the brain -- a device that the local startup believes could eventually become a revolutionary tool in the treatment of depression as it could be used at home. 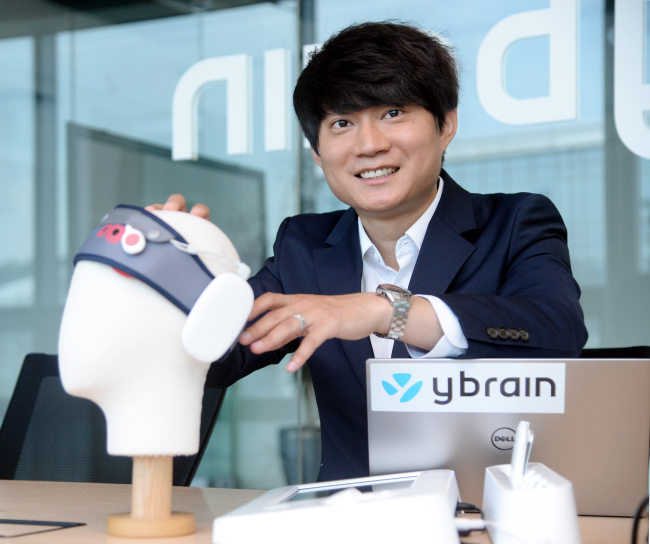 Established in 2013, Ybrain was co-founded by three engineers from the Korea Advanced Institute of Science and Technology -- including Lee, a former researcher at Samsung Electro-Mechanics -- with the aim to develop wearable devices to treat mental disorders including depression and Alzheimer’s disease.

Having attracted some 10.2 billion won ($9 million) in investment over the past four years, Ybrain has now commercialized its first-ever headband wearable that treats depression, named Mindd.

Mindd was launched in Korea in March this year after being approved by the Ministry of Food and Drug Safety as a medical wearable that treats depression.

The device treats clinical depression via transcranial direct current stimulation, or tDCS. It works by delivering a tiny stream of electricity to the frontal lobe of the brain, where decreased activity is associated with depression.

Weighing just 150 grams, Mindd stimulates neurons in the frontal lobe by conducting electricity via an absorbent pad touching the forehead that must be soaked in saline solution before use.

Users feel a light, tingly sensation as the electricity passes through. Of the electric waves generated by the headband, only 20 percent reach the brain. According to Ybrain, clinical trials have shown the electric therapy’s effectiveness, without any reported side effects. 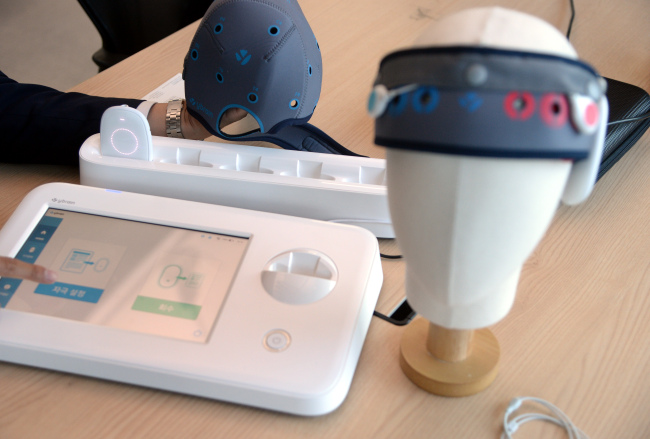 Ybrain’s headband wearable “Mindd” (Park Hyun-koo/The Korea Herald)
In addition to the core technology behind the device, Mindd is also unique in that it can help carry on treatment that began at a hospital in a patient’s home, Lee said.

Patients with depression are usually required to take medication as part of their treatment, but there is no concrete way for doctors to check whether patients have taken their pills as required.

However, concrete records are stored when patients use Mindd. In addition to tracking when they have received their electric therapy, patients can also record their physical activity levels and sleeping hours via a smartphone app. Such data is automatically sent to doctors who can then use the information to monitor and improve treatment.

“By objectively recording everyday health markers that were previously reliant on the subjective memory of the patient, we hope to improve the quality of medical treatments,” said Lee.

So far, Ybrain has deployed Mindd at 12 major hospitals in and outside of Seoul. Its goal this year is to install its device at around 150 local hospitals and to have the device treat at least 3,000 patients, the 34-year-old CEO said.

The Korean medical device startup is also preparing to launch an upgraded version of Mindd that is set to become the first of its kind in the world.

Dubbed Y Band, this dry-type tDCS device for depression uses hydrogel material, instead of a pad soaked in saline solution, to conduct electricity. It is due for release within next year, Lee said.

Looking ahead, Ybrain’s biggest mission is going global. Mindd is hoping to obtain the European Medicines Agency’s official certification in July, after which sales can begin across Europe.

The Seoul-based company is also planning to register its device with the US Food and Drug Administration, aiming to secure approval there by 2019.

In the US, Harvard Medical School has embarked on a 500-person clinical study on depression in which Ybrain’s product is being used. Combined with the firm’s own clinical trial data collected in Korea, the results from Harvard’s study are expected to further strengthen Mindd’s credibility as a medical wearable for depression, according to Lee.

“I think that mental illnesses in general have always lacked good solutions compared to other diseases. Moreover, countless people are suffering from depression every day, yet few seek medical treatment,” said the entrepreneur.

“With our device, we hope to contribute to solving this problem by offering patients the option to treat depression from the comfort of their home,” he said.