A Seoul court ruled Thursday against an appeal filed by a former state-run bank chief found guilty of slandering the head of a South Korean retail conglomerate.

The appeals division of the Seoul Central District Court upheld the prior verdict on Min Euoo-sung, former chief of Korea Development Bank, that he defamed Lotte Group Chairman Shin Dong-bin by making false statements about him and his father. 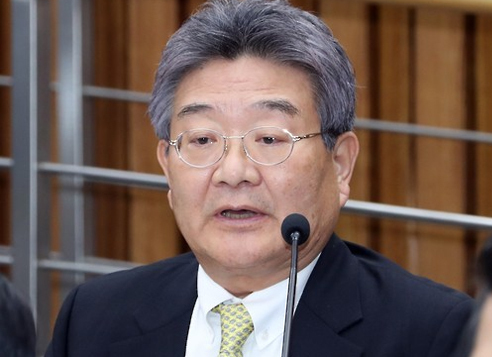 This file photo, taken on September 2016, shows Min Euoo-sung, former chief of Korea Development Bank (KDB) answering questions from lawmakers at a parliamentary hearing. (Yonhap)
Min was ordered by the court to pay 5 million won ($4,450) on slander charges late last year. Shin and Lotte sued him for telling reporters in October 2015 that Shin Kyuk-ho, the chairman's father, was "caged up" in his office located at Lotte Hotel in central Seoul and that he was "being surveilled" by his son.

His remarks came amid an ongoing family squabble at Lotte, the fifth-largest conglomerate in the country, between the chairman and his elder brother over leadership succession. Min is known to be in support of the founder Shin and his eldest son, Dong-joo.

The previous ruling found Min guilty on grounds that his claims about the mistreatment of the elder Shin were not true. The surveillance cameras installed in the office are designed to prevent footage from being sent outside and it was the elder Shin who wanted the cameras to be installed.

However, the court cleared Min of the obstruction of business charge that was included in the previous ruling. It judged that it is unlikely Lotte's business was affected by his remarks. The court retained the ruling on the penalty. (Yonhap)